Spring is here ,or is summer? The weather is erratic, very hot the last few days but it was still chilly in the mornings and evenings 2 week ago. Suddenly very hot again and wild winds.

Our hearts go out to the people who have had the terrible fires around them and lost homes. We feel very sad for the young chopper pilot,and his family. who lost his life helping others,  We have been lucky so far and haven’t had to go through a fire and we are so grateful to all the brave people who go out and risk their own lives to help others. Larry has installed a very good water supply system . The fire department have now made our property a static water supply source and helipad  and  have it marked on the satellite in case of it having to be used.

The snakes and goannas are about once more .It’s a race to the chicken pen to get the eggs before the resident goanna ,he often beats us.

The swallows have been born again. They made 4 nests round the house this year and it’s always great to watch them raising their young and watching them leave the nest with perfect flight.

The willie wagtails made their usual nest  and their young are also out. The parents are vigilant and have no fear of the bigger birds giving them a good telling off if they come to close to the young flyers. 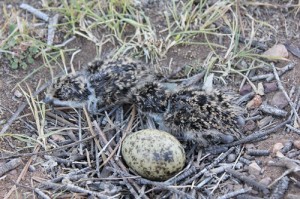 The resident plovers have had babies.3 eggs were laid in the house paddock,2 hatched. Mum moved them away down to the river bank where she had them pecking in the muddy bank teaching them  how to eat. dad was on a look out a lot and they must have decided that was to exposed as she has now moved them again to another spot higher up from the river and down the road. We are looking forward to seeing them come home with the proud parents.

We have a baby tawny frogmouth in care who I have named not very originally “deep throat” .Those of you who have seen a tawny open wide for a mouse will understand why. He calls constantly when I walk past his cage so he also gets called “pig, hog, guts” not very nice I know but I don’t know where he puts all the food. 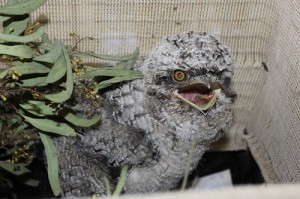 It is ideal to bring more than one tawny up together but that’s not always possible. This one we have fell from a nest in a public school and the nest was up to high for him to be put back.  Adult Tawny’s that  come into care over will not self feed but are quite happy to perch and just open their large mouth at dawn and dusk and swallow the easy meal. In the wild they catch and kill their prey before swallowing. Tawny’s love mice and day old chicks. Fortunately strips of heart rolled in insectivore  are a good nutritious diet for them also. They also eat frogs, lizards, cockroaches, small beetles and grasshoppers. Tawny frogmouths have very sensitive feathers and must be kept in a cage covered on the inside with shade cloth to prevent damage (as their flight must be 100% for survival) and the same applies when they are moved into the aviary before release. 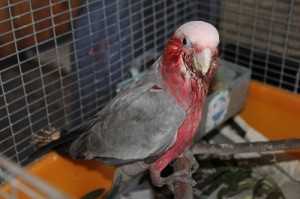 We have a young Gala who was probably just learning to fly and had an awful collision.When we picked him up from Muswellbrook he was in a bad way. He had no visible breaks ,wings looked good  but he was unable to stand up right even though his claws were gripping. He couldn’t crack seed so we gave him a special wet food, using a spoon shaped into an adults beak, that is used for rearing seed eaters. It was very hard to get him to take anything as his swallowing capabilities were very much diminished. He had a rasping which seemed to be coming from the chest area. We decided that he  had sustained neurological damage  when he collided and probably had a spine injury but without an x-ray impossible to really know and to what degree. We put him on a course of antibiotics for 7 days which worked wonders. He began to crack his seed and eat up big time. He was able to grip the perch but when on the ground could only stand by balancing by holding with his beak on the cage wire, very smart. Within about 4 days we could see he was improving little by little so we moved him into a larger cage so he could exercise more . He is now in an aviary .His legs are working and he is trying very hard to get his flight. He is doing well , but unable to get height but I’m sure that will come .Larry has named him “Galy” and taken on his rehab care . Thanks to our bird vet Alex Rosenwax and his staff in Sydney who we worked with very closely and tried to learn as much as we could we have able to get this bird so far. I hope I will able to post a good news update of him in flight soon. 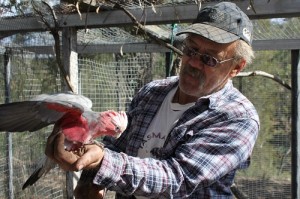 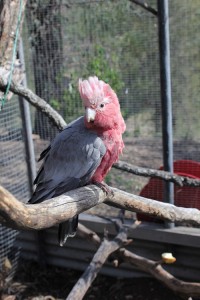 We have a magpie who was a baby on intake .I don’t know what the background was but he is now a juvenile and starting to self feed and fly around the aviary so he will be free soon. As soon as a magpie ,currawong or raven come into care we dose them for gape worm which they usually have .It was the foremost reason we would get  from a new carer saying they had a 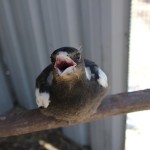 bird that wouldn’t eat. You can often see the gape worm in their throat. Once they have been dosed they usually start eating well.

We actually went to Muswellbrook after a call from Wildlife Aid asking if we could take a juvenile red-neck wallaby whose mother had been killed and a baby eastern grey kangaroo with the same story. The birds were landed on us when we got there as they don’t have many bird carers. We were happy to be 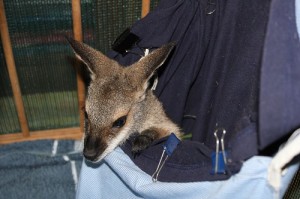 Moses in his bag

The juvenile red-neck wallaby “Moses” was almost  3 kilo on intake .That’s really out of pouch for red-neck but still drinking milk from mum. That’s a very difficult age to get a red-neck to bond with the carer and not be scared. We have managed to get him to a point where he will take his milk sometimes in his pouch but more often just standing but unfortunately we have to keep him penned for his own survival. 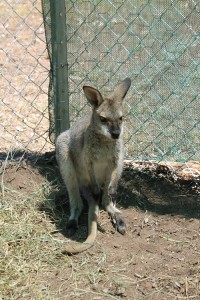 Moses is a beautiful boy

He has had a good weight gain so far so won’t be to long and he can go free. He is just  a bit young to go without milk yet. We have a lot of young red-necks that come to the house paddock for a supplementary grain feed so he will be fine .You might remember “Baba” whose mum was very old and she died here  when he was not much bigger than “Moses”. He  is still around and has doubled in size. He comes for some grain nearly every day and he is now getting a lot more confident around us. 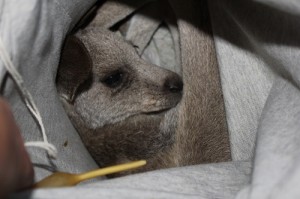 Billy in his bag

The baby eastern grey kangaroo “Billy” was not well when he cam home with us. I don’t know how long he was alone before rescue . He has been given what he needed and  is now thriving .He will follow me around, and also likes to be with Larry and get in way,  so he gets to have lots of  exercise to make sure his legs grow strong. Hopefully I will get a call to say there is one his age needing care and he will have a friend soon. 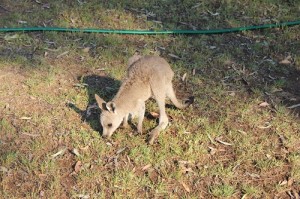 Billy out having a graze aprox age 7mths

For those of you that followed “Bozo” growing up he is now in excess of   24 kilo . He still hangs around on the back veranda but goes off for some time . He has been gone for up to 4 days and nights and sometimes a day and night .He is now about 2 years 2 months old so beginning to come into some sexual maturity .Eastern grey bucks don’t mate till they 4 years old but he’s started sowing his wild oats. My niece said she hopes he stays away from drugs and crime !!