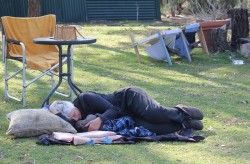 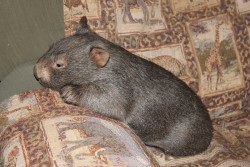 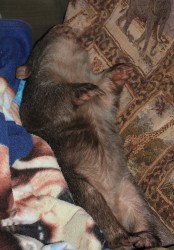 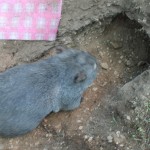 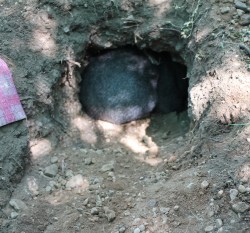 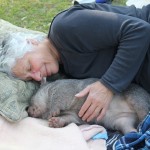 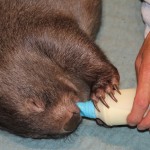 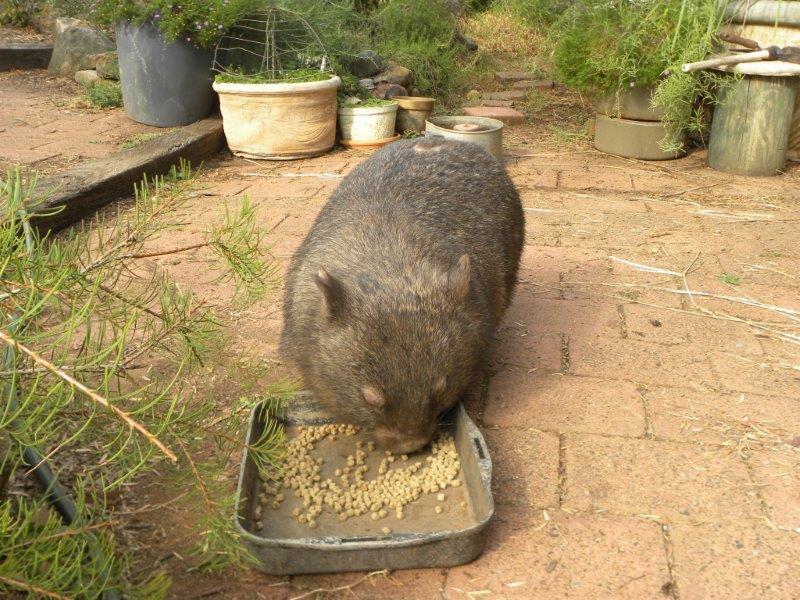 I received a phone call asking me if I could take an orphan grey female kangaroo. She was found on the Golden Highway at Cassilis. Her mother had been hit by a car and died. I went and collected her from the local vet and bought her home. She weighed 1147 grams . After measuring the length of her foot and Tail I ascertained she was about 205 gram underweight which was expected for a little orphan coming into care. I got her warmed up and gave her her first bottle which she took O.K. 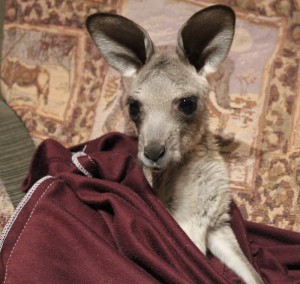 Wormie peeping out of her bag.

Things did not proceed well with this little girl . I would expect that within a week she would have settled and passing urine and feces normally. Initially all seemed like it was going O.K. She did have a small weight gain then started started passing runny yellow feces . I determined she had thrush a common complaint of babies coming into care and not difficult to treat with nilstat. She was not sucking well and  not enough. Feces then became like black pea soup! The woman that had handed her into the vet had left her phone no so I rung her to see if I could get some backround info.She was wriggler and I called her Worm which soon became Wormie! What had happened the woman thought she could manage and had kept the Worm for 4 days and had been giving her cow’s milk then she realised something was wrong and took her to the vet. Cows milk is a no with roos . They must be fed the correct formula like mother’s milk. I got the local vet to do a feces test .They looked for various things it may have been but to no avail . It seemed the likely cause was indeed the cows milk.  I then consulted Ted for his wise and insightful counsel . He got me to put the little Worm on a course of codeine for her weight and age administered at certain times. After a few days it fixed the problem and she started to suck normally as the nilstat had done the job with thrush and the codeine her tummy troubles. She then began to thrive. I wanted her to have a friend to grow up with particularly when she was big enough to be moved into the outside roo pen. I contacted Penny in Dubbo and she had a little male grey approx the same weight . He was already named Duke and Penny agreed to bring him here. Duke was sick , he had some little bald patches, thrush and a wheezy chest . Poor little fellow had Pneumonia so againTed to the rescue . Ted got me to give him 2 courses of antibiotics which was done over a 2 week period . Finally I had two healthy little greys both thriving .They got on really well and it was wonderful to watch them grow into healthy adolescence. 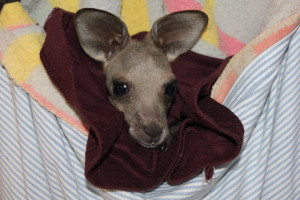 Wormie with head out of her bag. 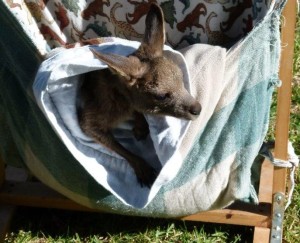 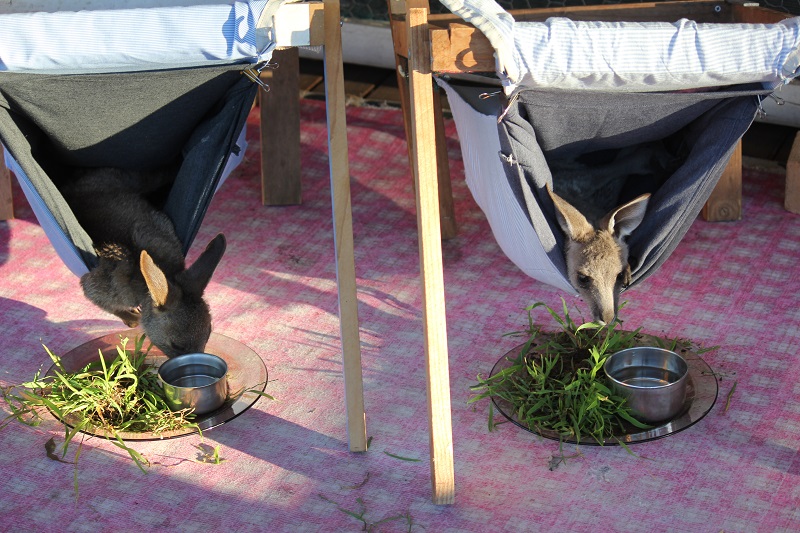 Wormie and Dukie finally both well and thriving.

Worm and Duke were moved into the outside pen mid Sept . They were happy n there together and the 3 of us would go walking around the property during the day. 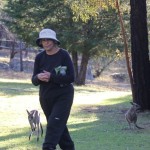 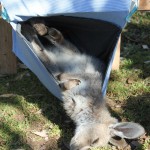 wormie tired – its a hard life! 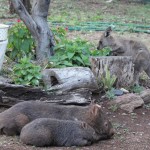 Duke with other friends 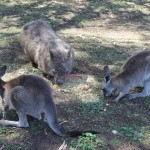 Duke and Worm with Scarhead. Scar healed by now but name remains.

Not getting much rain and grass not as abundant for grazing as it had been.

Worm and Duke on guard at front door!

These two almost ready for release, approx 11 kilo. Still like evening milk ,out all day but  still locked them up in the pen at night.They come when called for lock up , reluctantly!

The decision  to release was taken out of my hands as we had “The Apple Gum Disaster” . Mid Feb 2018 one evening Larry and I were Having dinner. I had just been up in the pen and given Wormie & Dukie their eve milk and locked them in for the night. We heard an almighty crash and it felt like the ground shook .The enormous Apple Gum Tree had fallen right over the pen .Everything in there  was squashed. Its a sight hard to explain when a large tree falls , quite scary. We were sure we were going to find the roos dead in there .After an extensive search no bodies were found .We got our torches and starting searching the property . Worm and Duke both found O.K. and didn’t seem very perturbed so that was their release! The tree had fallen and flattened one side of the pen where they had been grazing but the angle had missed them and they had jumped over what was left and continued their grazing in the paddocks. 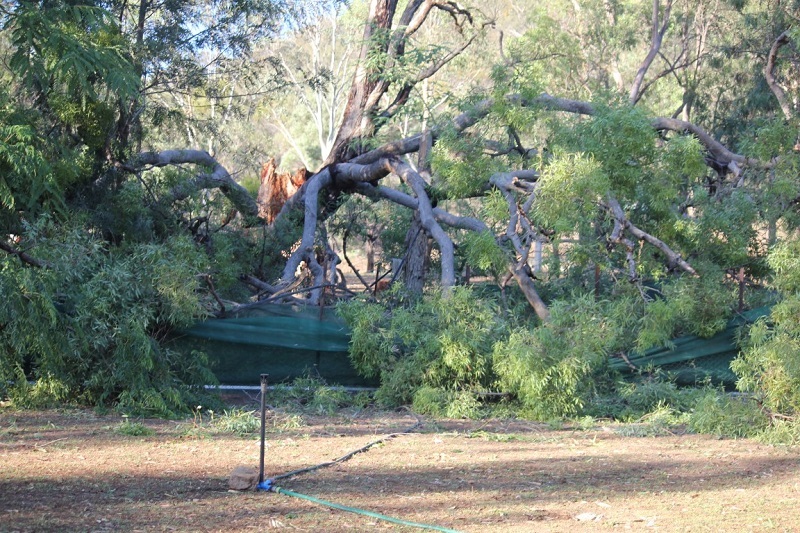 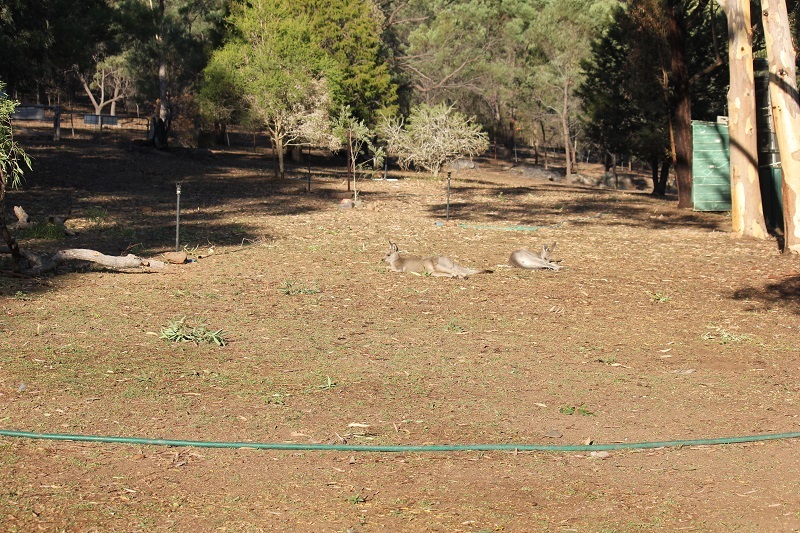 We did have a pen there, what happened to it!!?

Don’t seem to perturbed , resting in the sun. Worm was still around through March then she went off and would return sometimes for food as we were heading into drought and the grass was sparse. Duke stayed for much longer and he also cut his foot on some tin so he had to be treated till the cut healed. Fortunately he trusted me and loved his almonds so while I treated his foot he would eat about 10 almonds which gave me time to do what was needed. 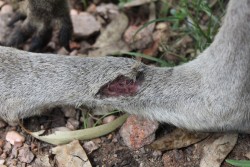 The cut healed completely with no complications. Duke was still around for a couple of months after Wormie.

Wormie has returned from time to time with a baby .We have seen Duke also .

While Duke and Worm were only youngsters in care we also had a wombat visitor come and stay for 2 weeks.