Last Dec 2012 we had a new unexpected arrival to our flight aviary. Chu and Man were obviously very happy in there and Chu laid eggs which 1 at least was fertilised and out popped young Fu. Named after our old bird Fu who died of old age some weeks before. I can’t say they were great parents but did their best. They were certainly feeding him but as we really didn’t want to breed caged birds (these are unable to be released and came into care as unwanted pets) we hadn’t provided them with a breeding box . They did follow their natural instincts and mad a nest in a log but neglected to keep it clean. The nest actually collapsed and out fell young Fu. We took him in and raised him then returned with mum and dad. 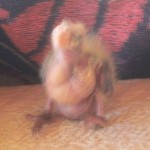 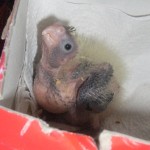 Raising a cockatiel to independence takes about 7weeks. We had a friend staying with us from Sydney who was a great baby bird sitter! he spent many hours on the back verandah watching the wildlife and introducing young Fu to the outdoors . 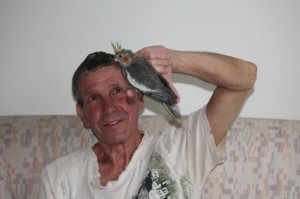 We had an adult  female kookaburra in care. She had damaged a small bone in her wing and had not been able to fly and catch food .She was on the road and picked up by a kind young man on his way to work who took her to the local vet in town who then called to see if we might be able to help. She was very thin so we put her in a small shade cloth cage to rest ,gave her a course of antibiotics and began offering her mice to eat. She ate well, got her strength back and while that was happening the small bone calcified and mended and we were able to release her. Kookaburras are part of their own family group and have a territory so you should always ask where they were picked up from and release the bird to the same place so it can reunite with it’s family.

We also had a young raven which we found on the ground on our way back from town .Only in care for a few days. It seems  that he had a collision in strong winds and had suffered some minor concussion. He was also fine and released.