Our closet  neighbour lives about  5ks away. He turned up here saying that wombats had dug under his house and caused  a terrible mess. This guy has had his place here for about 30 years and has lived there permanently on and off and so have  wombats . I found it quite silly that in all that time he hadn’t boarded around the bottom of his house,  he is a builder!  Anyway he and his partner decided that the wombats under the house  had to be moved and they weren’t  having it any other way. I said that the wombats  should not be moved out of territory but put into a capture cage while a quick job of boarding up the bottom of the house was undertaken then let out there .As they knew that territory they probably would have been fine. Larry went with him to see what was going on . They had to do some digging and it turned out there was Mother wombat and baby who had somehow got separated by soil erosion. Another adult wombat was also stuck under there. The bloke wouldn’t consider the suggestion I had made even though Larry was willing to help him.  I completely withdrew from operations but poor Larry had to help as there seemed to be no alternative. The chap was determined to move them down here. They got the  adult male wombat out who was virtually buried in the dirt. They put 2 adult wombats out  male and female in 1 cage together as they had only the 1 large cage on hand not having realized there was 2 adults under there. The baby was put into  another smaller cage. How those 2 adults managed in there together I have no idea and the mother must have been frantic to be separated from the baby. I specifically said not to separate mother and baby but apparently it couldn’t be helped. Healthy adult wild wombats are something I certainly couldn’t handle alone so I can’t even imagine how they got them and into the cage.  I think the other adult was probably attacking the baby which caused the separation , commotion and erosion of the soil under there. I have seen this happening in the front yard so being under the house would certainly compound the situation. Mother wombats defend their young with determined ferocity when required. 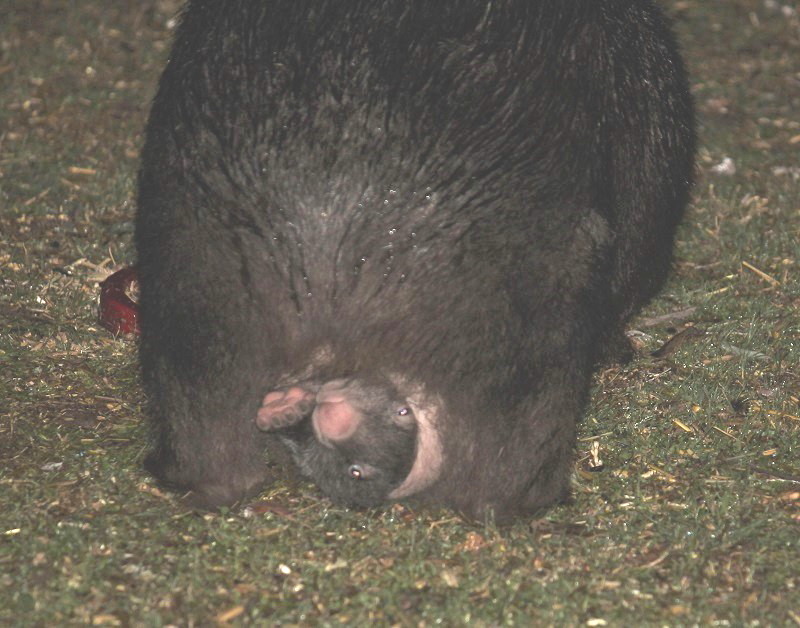 Mum with baby in her pouch – what a dear little face peeping out!

There was no stopping these people from moving these animals .They were getting cows and had decided that wombats and roos no longer welcome.  Larry found a couple of burrows that looked to be unused on our land and the animals were released , mum & baby together at one burrow and the male at the other. Larry put support food and water  by the burrow entrances and tried to keep an eye on them. The following day Larry found the male about 2ks down the road, trying to get back home, he was dead, stressed of course and attacked. A day later Larry found the baby dead . It had been brutally attacked. He searched for the mother for several days but couldn’t find her and she was not using the burrow were she had been released, We don’t know what happened to her. Larry went and told these people what had happened and asked them not to move anymore wombats. They were hostile and didn’t care . They said they were going to start shooting , which they did. As we understand there was no authorization for these actions. We tried to get assistance from NPWS but no one was interested. They left dead baby kangaroos lined up at their gate so we would have to see them when driving to town. They left a dead wombat lying in one paddock on display and another adult dead by their gate on the side of the road on view. Larry called Ted Finnie ex wildlife vet at Taronga Sydney and Western Plains zoo and asked if he would be prepared to do an autopsy to determine cause of death and see if there was a lodged bullet in the animal , he was very willing. Larry called local police who also came on board to be present while his was happening . The time was set up for this to take place. Larry called NPWS ranger for his area who had refused to act to help in the past events and informed him this was taking place and asked if he wished to be present. The ranger had previously said he didn’t want to help because he didn’t want to make any enemies! The next day Larry went to meet Ted & Senior Constable Michael Blades to carry out the autopsy. When he got there the wombat had been removed. Ted and Michael were both on their way out to the spot but no contact from NP ranger. Only we knew that this happening so we believe  the perpetrators were told to remove the  dead wombat. We believe NP ranger did this.

It is illegal to shoot wombats or move them out of territory. We have found that NPWS don’t police any of this activity and turn a blind eye when asked for help. The penalty  faces a fine of up to $39,000 and a maximum of two years in jail. I don’t believe this is ever policed by rangers or imposed.

A very sad situation for our wonderful wombats .

It was a terrible situation for us as without backup from NPWS  we were helpless to stop it.