Many years ago when Larry & I still lived in Coogee we heard that the local vet in  Merriwa, Ted Finnie, was an ex wildlife vet at Taronga zoo. Great news, as we thought when we were living here we would have this wonderful vet in town to call on for guidance with any wildlife that came into care. Larry had cause to take our dog Jack to Ted for some treatment once when he was in Merriwa and came back to Sydney and told me he was a very nice man who instilled confidence, that he knew exactly what needed to be done. Alas, once we finally moved here we were told Ted had retired and sold his practice to a young vet Anthea Wright who was originally from Merriwa , had gone off to do her degree and returned. Anthea was a lovely women and loved all animals but her main interest was with horses and farm animals .She was always willing to help if she could and give us medication when we knew what was needed. We heard from our NP ranger that Ted and his wife Jenny were still living at their property in Merriwa but I felt it was an imposition to call someone who was retired. I had contacted Ted by phone at his practice a few years previous after being advised to so by “Healsville Sanctuary” in Vic.  When I was possum Co Ordinator for WIRES in Sydney’s Eastern suburbs I needed some help regarding stress dermatitis that adult possums were coming into care with and also contracting while in care. Ted put me on the right track and I was able to get pathology done to show what it was and prove why it was happening. I always had this memory of how knowledgeable Ted was and happy to pass on that knowledge to me. Many people will not do this, due to some ego problem? It was easy it was once I talked to Ted. In the mean time I had done some research on the internet and also found that Ted was the first wildlife vet that Taronga zoo had and he had worked for over 10 years before transferring to Taronga Dubbo Western Plains Zoo where he worked for about 6 years. I also realized that Ted had made a very significant contribution to veterinary science, particularly  regarding wildlife.

Fidel appeared one night with a badly swollen back leg ,limping. Catastrophe , what to do ? who would know ?and further more wombats the size of Fidel who had been free living for over 2 years, a major trauma to catch and transport which would probably result in death by stress. Throwing caution to the wind I rung Ted. I was terrified as I was  totally in awe of his knowledge and wondered how I was going to speak with him without him thinking “who is this fool on the line!”  The phone was answered by a woman, with many apologies for calling uninvited I explained the situation. The woman who was Mrs Jenny Finnie was so nice and told me not to worry that Ted would help . Actually it turned out that Jenny’s knowledge was very extensive also. She worked at Taronga as secretary to the board for years where she met and married Ted. She became his vet nurse in Merriwa for years and a carer of many different species of wildlife. She is is one of the kindest and gentle people I have had the good fortune to meet and call a friend. Anyway After some discussion it was decided Larry & I would get Fidel into a large cage and transport him to the wombat pen where he had been bought up. Not so easy……..  we had a very big cage that my niece Nina had given me which had once been used for Sunny dogs toilet training  when Sunny was a youngster. 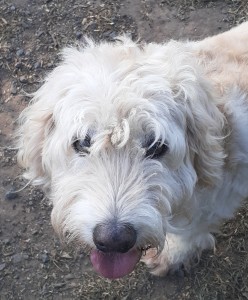 We called her Sunny Sunshine was her name and that’s what she bought to all that met her!

We threw a large heavy blanket over Fidel and pushed and shoved , grunting and groaning we managed with great difficulty to shove him in. He was protesting, rockin ‘n; rolling around in there with the cage in danger of tipping over. We got the trolley and Larry somehow managed to heave the cage with Fidel ensconced into it and wheel it about 1/4 k over bumpy ground to the wombat pen. It’s most unfortunate I didn’t get a video as in hindsight it would have been amusing but it certainly wasn’t at the time, mass stress all round!! Fidel was not pleased about being locked up but accepted it and used his old burrow still in there. The next day Ted & Jenny came to our place for the first time. Their property is about 60k from our place. It’s a beautiful place about 10 times the size of ours and full of wildlife along with Ted’s cattle , Daisy donkey and her companions , a couple of sheep and beautiful Daisy dog and various others that have passed through there over the years. Fortunately Ted was able to observe Fidel over the fence and was able to diagnose the most probable cause , an abscess which could have been caused by a bite or the like . Just as well because Fidel had decided anyone who entered was a target for attack. Ted gave us some medication which was  crushed and put into a bowl of food we would give him morning and evening for 2 weeks .He still liked eating pellets when offered so that was good. Larry had devise a way of getting out quick once the food was delivered, despite being sick,  Fidel would “attack” any legs that were in his pen. Getting back out of the gate was impossible as Fidel was to fast so you couldn’t get the gate open in time. The only option was to climb up quickly beyond his reach! 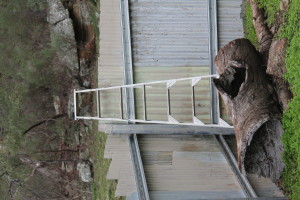 Fidel fully recovered and was released from the pen. Larry observed him  for 4 hrs and tried to follow to find out where his burrow was.  He chased Larry a few times and he  went down all the burrows close to the pen and checked them out then headed off up the hillside where I believe his main burrow is and gave Larry the slip! 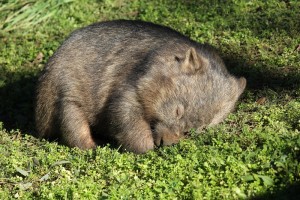 Poor Fidel sick in his pen. 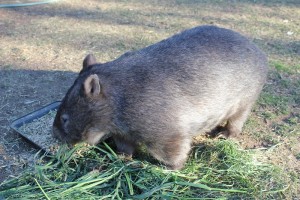 Thanks to Ted Fidel lived on and thanks to Fidel we made 2 wonderful friends who love animals and the natural world as we do. Ted and Jenny are always around to help us with any animal care when we need it. Their help and friendship has enhanced our lives. 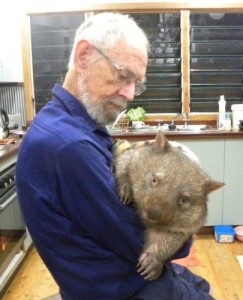 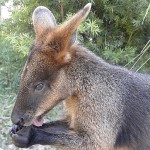