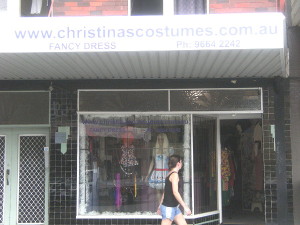 Christina’s shop which was in Coogee, Sydney, NSW 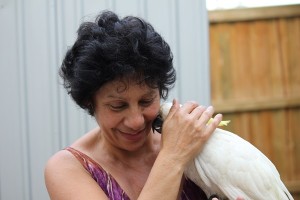 I was the owner of Christina’s Costumes Fancy Dress Costume Hire in Coogee, Sydney, for 30 years. Profit from Christina’s Costumes was used to fund the establishment and running of “Wombat Creek Native Animal Refuge”. We purchased the property in 1998 and Larry spent half his time between Sydney and Merriwa establishing the refuge to the point that were able to move here permanently in Feb 2012.I am now working on establishing an online only business www.christinascostumes.com.au with original costumes for hire or sale plus wigs and accessories to help with the ongoing costs of the refuge.

We have always had a great love for animals and have always been interested in animal welfare. Our interest in wildlife increased and we became more aware of our unique and diverse Australian wildlife. In 1998 we joined WIRES (the NSW Wildlife Information and Rescue Service) as volunteer rescuers and foster carers of wildlife in need. I purchased the property in Merriwa NSW, which is bordered by the Goulburn River National Park on three sides. With the help of my partner Larry and other interested and wonderful people who have volunteered their time and labour willingly we have established the wildlife refuge, named after the population of wombats that live in our valley. The land covers about 80 acres, which is an extension of the National Park. We are very grateful to our sponsors Greening Australia and Waratah Steel for help with funding materials for the fencing to keep cattle out. With some management the native grasses have started to grow once again and now provide some extra food for the grazing wildlife, especially in dry periods when it is short supply elsewhere.Some aviaries have been built and are in use for rehabilitation.

We are very interested in the protection of the wombat population in the valley and eventually hope to establish a facility that enables us to treat adults suffering from mange.

mange on a common wombat

If left untreated the result is a painful death for the poor old wombat. The feral fox population spreads the disease and the parasite is able to take hold when conditions are unfavourable for the wombats, particularly in times of drought. 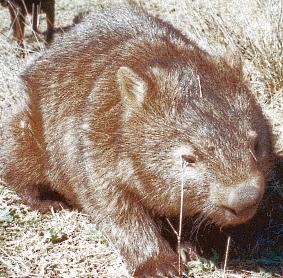 common wombat – healthy adult wombat who lives at our place

In 2004 mange decimated the
southern hairy-nosed wombat population in South Australia. The northern hairy-nosed wombat now only inhabits Epping Forest National Park and at the last census in 2010 there was an estimated population of 163 wombats. The range on the east of the country is quite narrow, beginning at Deniliquin and ending
at the at the Epping Forest National Park in Queensland. With the current population of nine wombats at Richard underwood Nature Refuge and the expected increase since the 2010 census, it is estimated that there are now approximately 200 northern hairy-nosed wombats on the planet. It could well be Australia’s next extinction. The name common wombat gives the impression that there are so many there is no need to be concerned (as was the case when Europeans first colonised Australia and they were given their name). 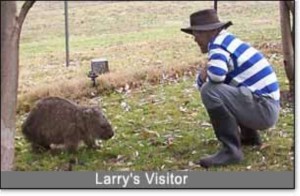 Once the caretaker’s residence at Wombat Creek was completed Larry was able to concentrate on the surrounding land and rehab enclosures needed.

Larry & I are both authorised raptor carers. We looked after these wonderful birds when needing hospitalisation in Sydney

Sandy with one of beloved rescued Eclectus parrots

Thanks to my friend Sandy Beynon head vet nurse at Bird & Exotics Vet we were lucky enough to work under the instruction of Alex Rosenwax one of the best avian vets in Australia. Sandi also takes photos of wildlife and has a site where you can view her work. http://www.facebook.com/SandiSnaps?fref=ts

Larry is a snake handler and we are bird, reptile, macropod and possum carers. I also cared for orphaned flying foxes in Sydney but we don’t get them here in Merriwa.

I will add posts as developments happen at the property. I hope you find our story interesting and continue to follow it.

Have a great time at your party. Thank you for supporting our wildlife. www.christinascostumes.com.au