Larry and I both felt exhausted after things got back to some normality .Driving miles to find some grass, constantly feeding support food and cleaning up became a thing of the past. After Wally , Che and Raul had all left to live their wild existence we really felt like we needed a break. 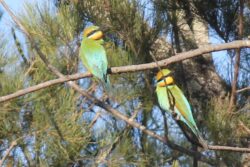 We only took on a  Magpie Oct 2020 who was in a bad way .he stayed with us for 6 weeks and made a full recovery and flew off which was good.

By April 2021 we decided it was time to start taking in some wildlife that needed care once again. We were no longer members of WIRES as being in the wrong demographic we couldn’t access any support from them and the cost of the animals we had been caring for over the years and then during the drought had taken a financial toll on us.

The Wildlife group in this area is Wildlife Aid. We had made inquiries a couple of years earlier about the possibility of joining this group and we went to Muswellbrook to meet the couple that were running things. We didn’t find their practises   agreeable to things we believed so decided not to apply for membership. When the drought was on I had run a fun raiser on Facebook and I received a message from Meg who was one of the committee members of Wildlife Aid .It was encouraging us to join them. Being part of a group has many benefits for the animals  and us if part of a good network. We decided to take another look so put some application forms in. We found that there had been a restructure and the people that had put us off were no longer involved in the group .Our applications were accepted and we are now part of a lovely group of people all trying to do their best to help wildlife.