The swallows have had more babies since my last post .It’s really swallow heaven here as there are so many small flying insects for them to feed on.

The 2  plover chicks that hatched got moved by mum down to the river bank. They tuck them in under their wing and off they go.They were down there for a couple of days then she moved them again to higher ground close to were she had the nest. One got preyed on by something, we think a goanna , the surviving one is growing fast and hopefully soon be flying.Both mum & dad are vigilant so hope they are successful with this offspring.

The baby tawny grew fast.His feathers were in great condition and tail feathers long enough for balance during flight. 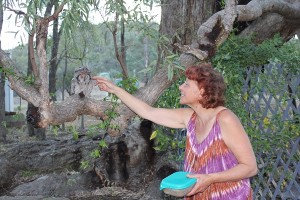 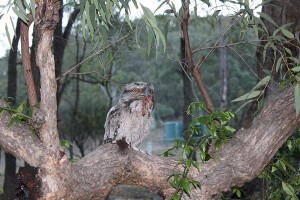 Deep Throat released. Holding a strip of support food in his beak.

He was released last week.We put him into the big apple gum tree in the house paddock after a good feed at dusk.He stayed there for a couple of hours then flew into a tree over the vegetable patch .In the morning he was gone. We like them to stay around for a few days so we can give some support food and watch their progress.That night while sitting out giving Billy his evening bottle I heard him .Larry found him in a tree over hanging the flight aviary .He wasn’t alone , another tawny the same size was there also.! Larry set up a ladder and went up and gave him a couple of heart strips rolled in insectivore which he took gratefully then flew off. The next morning there he was looking like a twig as every good tawny should by day. He disappeared early afternoon when the sun got to hot there and we haven’t seen  him since but am sure he is doing fine. 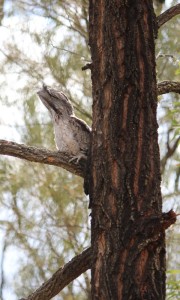 clever Deep Throat being a twig next morning after release

Galy is flying beautifully and has put on weight. We have had some galahs coming around which is good. We have rain at the moment ,which everyone in these parts is grateful for but as soon at that has gone and the sun is out again we will release him.(yes, he is boy as he has brown eyes)

The cockatiels ‘Young Fu” and “Lady” have mated and we can see a 2 young babies have hatched in the nest which is in a log. These cockatiels can’t be released as they are breed birds that were lost or surrendered but we didn’t expect them to be so happy in the flight aviary they would start breeding. “Young Fu” was the baby born last year to “Chu” and “Mani”  and “Lady” was bought here about 6 mths  by a friend who got her from someone living in Swansea.She only has 1 eye but she is happy and healthy.

Unfortunately the 2 magpies failed to thrive and it was obvious they had a congenital defect so had to be euthanased. 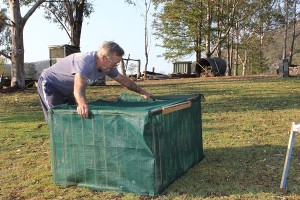 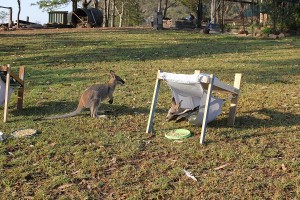 Moses the red-neck grew very well and he is now released and has buddied up with 3 residents all about his age. They visit morning and evening and Moses would take his bottle from me but has decided in the last couple of days he no longer needs milk formula. He looks great and it’s so good to see him bounding around with the others .I always feel very sad for the little ones when their mums get run over.Red-neck wallabies are much smaller than grey kangaroos and only have to be in care till they are about 5 kilos. They mature much quicker than a grey kangaroo. Moses was ready to be released at 4 kilos as he was older when I was asked to take him, weighing 2200 grams and had lessons from his mum about how to behave. I had to assess if it was better to keep him locked up longer and give him milk formula longer or if the stress would be detrimental to him. I decided to go for release and he decided I was O.K. and kept coming to me for his milk while he wanted it so it was a good call. Back yard carers would need to keep these animals in care longer than we would as they don’t have the wild ones living around them as they do here and coming to the house paddock grazing around the house. 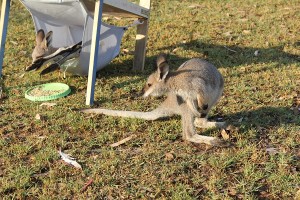 Billy has settled down and is now growing at a good rate. He is lucky he has Bucky and Bronte living here as he grazes with them every day. He is to little to be out alone and he would be with his mum for about another 12mths .He would be in and out of her pouch at the moment .He sleeps with me at night but that won’t be for much longer as he will want to graze by night soon. 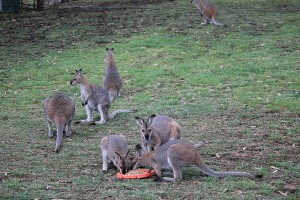 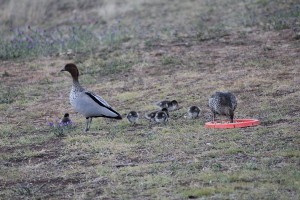 The wood ducks having been having babies down by the river. This family are now regular visitors. 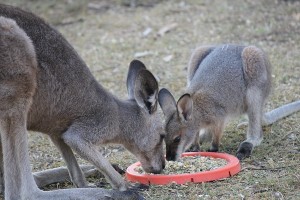 My favourite Bozo, has left home ……….  He started going off for a night here and there about 3 months ago then he went for 4 nights then a night here and there again .He has been gone for 12 days now .His sexual hormones were in swing so hopefully he is sowing his wild oats like a real kangaroo and nothing bad has happened to him. Larry reckons he spotted him over at Vicki’s, (our neighbours property) possible as he knows his way all around. Lots of greys around here. Anyway maybe he will visit so I know he is O.K. Must be great for him doing what he’s meant to and being with his own kind, hopefully  that’s the case and if so he will eventually turn up to see us. My friend Bunny was visiting a couple of weeks ago.She used to nurse him when he was a baby and I took these photos of him with her.You can see how big he is ,he would be at least 24kilos and is 2 years and 3 mths old. 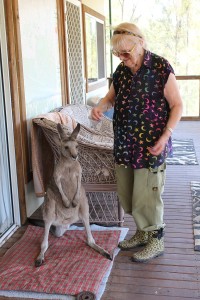 Really good news , a definite sighting of Bozo this morning in our far paddock with a small group of 6. Bucko and Bronte were also in that paddock having a graze.Bozo saw and recognized them.He went over to say “Hi” and they went off with him back to the small group and they all hopped off. Will be interesting to see what transpires from here. Maybe they will stay together.If that happens I’ll have to try to get a little mate for Billy as the “Big Guns” won’t be here everyday for him to graze with.He does graze with all the red-necks but be good for him to have a grey mate. I always worried about Bozo being on his own .It was a long road ! I was told by “experienced ” back yard carers that he wouldn’t be able to join a group and I should give him away…….. I wouldn’t dream of taking a macropod way from this environment and putting it in  a backyard! Anyway it appears that has been proved wrong! It can be done if you are willing to take the time and make some sacrifices……sleeping outside for months so the young one (not locked up) can graze at night without fear!! It was a long road…….

Another development  – I just got called outside to see what was going on.Bronte and Bucky are back and have with them a large young  buck which we think must be from that group Bozo is with. He came down into the yard in front of the house and was eating some grain with them. He took off once he knew we were all watching. It will be interesting to see what happens next. A couple of weeks ago  there was a buck hanging around here interested in Bronte.Maybe it’s the same one and that’s how Bozo has come to join that group (I suspect a small group of young horny bucks! ) Maybe Bronte has a jelly bean in her  pouch and will start her own mob here.