Due to unforeseen circumstances I had to move my blog to a new server but was unable to move the posts over. I will attempt to recreate our developments for those of you are new to the blog. 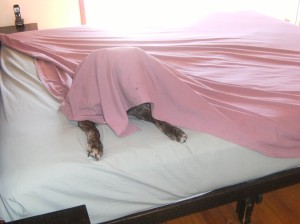 Misty hiding from the storm 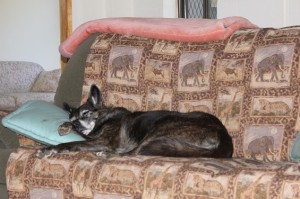 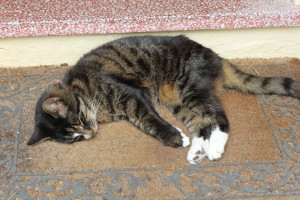 It seems like 5 mins but we have been here for 12 days today. There is so much to be done it almost feels overwhelming but just to sit on the veranda and listen to the birds with no other sounds is a glorious feeling. That’s not to say that it’s always tranquil. Last night we had a storm which I found quite scary. Larry opened his eyes when I poked him in the ribs then snored all the way through it! The thunder is so loud when your just one house surrounded by wilderness. I guess I will get used to it. The lightning lights up the whole house. The dog “Misty” finds it scary and she  goes into the walk-in wardrobe as it’s the smallest space she can lie down in. She is 14yrs old. The  19yr old cat “Feather” took it in stride .It was a big move for her. This is not a place I would really have a cat but when you have had a cat for 19yrs she is part of the family so anything other than bringing her would be unthinkable .She loves the big house and is quite happy just to come out on the veranda with us when we are out there. We have to be very careful as the goannas here are about 3 feet long and puss doesn’t know about them and could get crunched or she could sniff a snake close up and personal !! Not a nice way to go after making it to 19 which in human yrs is 181.The rescued cockatiels from Sydney Fu, Man and Chu think they are in bird heaven now in a large aviary flying  with lots of other birds around them. A couple of days ago I saw my first  Brush-Tailed Rock Wallaby which is now a threatened species. It’s incredible as once you see one you can’t mistake it with any other. The colour is gorgeous and the tail magnificent .They have a majestic way of moving. Larry has seen some and has told me but seeing one made me realise how special they are. Larry took these images. 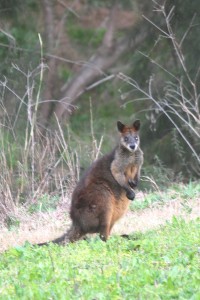 Everything is green so the grazing animals are looking really healthy.The wombats are coming out at night as they should and we are not seeing mange ones out during the day at the moment but they are around .I saw a fox a couple of days ago on my early morning walk.They really are beautiful creatures but not good for our native species to have around. In their natural environment I hope they are cared for. 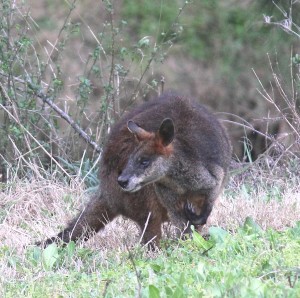 There is a lot of organising to be done so I better get on with it .