We received a call from a WIRES member from Dubbo. She had raised 2 wombats from babies but they were now to big to stay at her place and she needed the remainder of their time in care to be at a place that had a wombat pen for them both were they could be released. We were happy to help so it was decided she would bring them here. 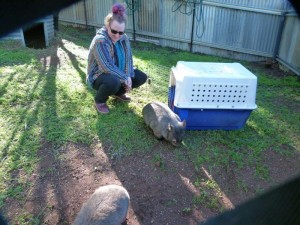 Penny brings Wendy and Wynona to Wombat Creek .Introducing them to their new enclosure till release. 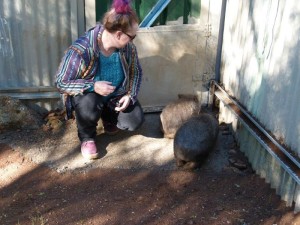 It must be hard to raise them and then relinquish them into someone else’s care . I had  many conversations  with Penny on the phone. She and her husband were  dedicated wildlife carers and she knew we also were. We had already met Penny as she had been to our place before to bring Duke, a grey kangaroo who I taken from her to pair up with Worm, a grey that had been found motherless at another property in Merriwa. She knew what  our place was like was happy to have her babies, now teenagers, come here.

At the time I had Duke and Worm in care who were very young and on 3 bottles each a day so it was decided that Larry would take charge of Wendy and Wynona. Wendy was the older of the two and quite a lot bigger than Wynona. Poor Wynona had been very sick when Penny took her into care.  Penny had taken such good care with her  and with visits and  advice from Dubbo Western Plains zoo vet she had got her through, She  was fortunate to have Wendy in care who had a nice gentle nature and Wynona had become attached to her. 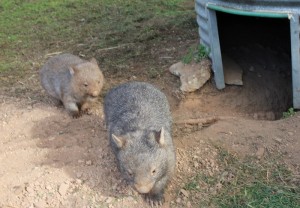 When Wendy and Wynona came to Wombat Creek Penny did not tell us that along with other issues Wynona had also had mange. Larry and I noticed she had a patchy part on 1 side and we did mention mange but Penny said she was fine. Larry became very fond of these two girls. Wendy was more aloof  being older but Wynona still liked to get attention and be made a fuss of. 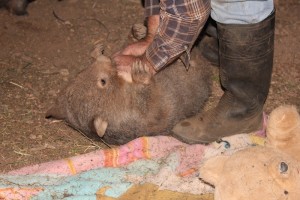 A bit of time went by and Larry noticed that Wendy was scratching more than we would have expected and Wynona’s patchy part had worsened. After contacting Penny we ascertained that Wynona previously had mange but had been treated for it. 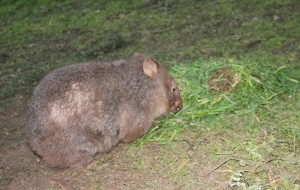 Larry and I thought perhaps it hadn’t cleared up completely and Wendy had caught it from her. We began a treatment program on both of them  simultaneously which was ultimately successful. 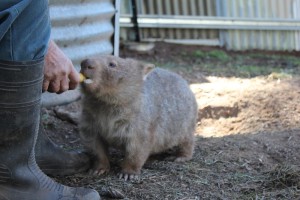 On arrival here Wynona was still on milk , not Wendy. Wynona’s teat that Penny had bought along was very chewed looking and Penny said she had a habit of doing this. Larry thought Wynona had a peculiar way of drinking her milk and on further inspection he saw that  one of her front teeth was broken off which is why she kept making a mess of her teats.

The teeth of the wombat are extremely similar to that of rodents. The wombat has 24 rootless teeth that grow continuously as wear is caused  by their grinding  of tough, fibrous grasses and  plants of which some are high in silica so they are continuously wearing the surface down. Wombats have a pair of large, robust incisors in  the upper and lower jaw . They have no canines, and there is a wide gap between their incisors and premolars. Hand raised wombats can develop teeth problems, not having  grass and roots  introduced early enough for natural wear to occur can be a cause. A small log or branch with bark attached   is a very good idea for  exercise and entertainment!

We called Ted to come to the rescue. Wynona was comfortable with Larry holding her and Ted used snippers to cut Wynona’s long tooth to the same length as the other one then using a file ground the sharp edge a bit.

Wynona’s long tooth to be cut

A valuable teaching lesson  for Larry also. Wynona was then able to suck her teat comfortably and eat properly. If the teeth are not corrected she would not be able to eat and grind her food in the wild  possibly leading to death. 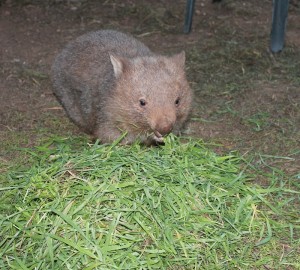 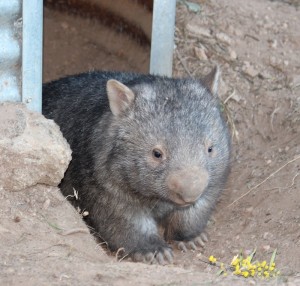 Wendy was heavy enough to release before Wynona  but we kept her in care  to be with Wynona until she also reached released weight and we released them together. They were released in Feb 2018 .Wendy was straight off into the NP .Larry used to take them out for walks but was always nervous with Wendy as she was rearing to go and because we hadn’t hand raised them Wendy didn’t respond as well to being taken back to the pen. Anyway all went well although we never saw Wendy at a later time we did see Wynona as she came back to the house paddock sometimes and Larry was able to give her a pat, perhaps Wendy did as well in the future but we had so many wombats around in the drought I doubt we would have recognised her. Anyway these 2 girls hopefully are still around somewhere and maybe Wendy has had a baby of her own.