I tried for a long time when Bozo was younger through some of the wildlife groups to locate some eastern grey kangaroos that were the same age that I could take into care to give him some buddies and create a mob. 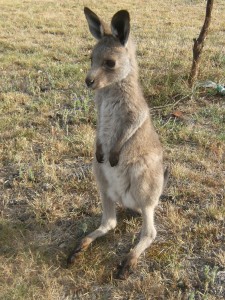 Eastern grey kangaroos live in mobs of varying sizes. We are surrounded by them ,lots of mobs but they are very nervous of humans and it’s impossible to get close to them before they all hop off .Some are small mobs of just boys “bucks” and some are large mobs of bucks, girls “does” , youngsters at heel “joeys” ,and babies still in pouch. A lone buck will not be accepted into a mixed mob but could join a group of bucks if there is a suitable group around. Does are welcome to join a mob. Despite my efforts I couldn’t convince anyone to part with some kangaroos at the time. About 2 months ago I made contact with Julie & Brad Smith who run the “Wildlife Aid” group in Muswellbrook .They invited Larry and me over to visit them so we did. It was such a pleasure to see the dedication there. 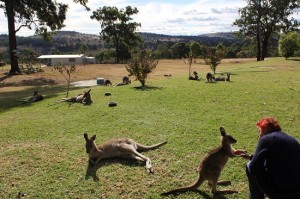 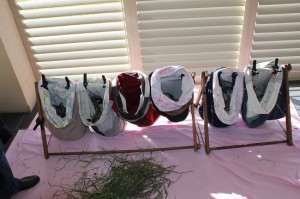 They then came out to our place and liked what they found .They decided to give us one of their female greys “Bronte” about the same age as Bozo. 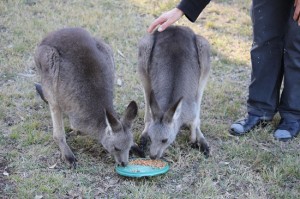 We had to lock Bronte up initially to get her used to being here and let her get to know Bozo. She didn’t like been locked up and Larry wasn’t happy about it so after the 2nd night he left her free. We couldn’t find her the next morning but thought she would return .After 4 nights there was still no sign of her and as she had already weaned off milk we thought she had joined up with one of the mobs. Julie and Brad had a buck a bit younger than Bozo still drinking milk so decided we could bring him here. He and Bozo were introduced to each other and we thought after a few days they would bond. Then the next day, much to our delight, Bronte returned. As Bucky had been around her for sometime previous he decided to stick to her like glue .We think he treats her like a substitute mum even though he takes his morning and evening milk from us. 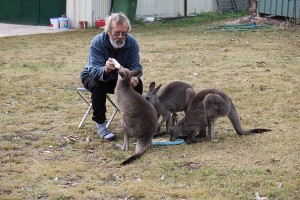 Bucky was found on one of the mining roads in Muswellbrook , his mother had been run over and killed. He is quite a nervous little fellow. Bozo likes both Bronte and Bucko but he doesn’t hangout with them as during the day as he likes his veranda. He goes off in the evening between 7-9pm .Maybe meets up with them at night , but we don’t know. They all arrive back about the same time in the morning about 6am.Bucky won’t spa with Bozo as Bozo
frightens him with his giant clodhoppers .Bozo spas with us, with me for
about an 1/2 hour every morning and he gets Larry when ever he can! The other morning I saw a very big buck not far from the house looking up this way. He had a couple of other bucks with him so maybe Bozo is meeting up with them by night. Either way he seems fine and I’m sure when he weans off his milk (hopefully soon) and starts to get some sexual maturity he will start spending more time away from the comforts of veranda! Another of my sisters visited a while back and Bozo liked her immediately, just the same as he did with Helen. He doesn’t take to people just like that so I think there must be a similar smell between siblings which is recognised by some animals who likes having aunts to spoil them! 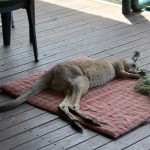 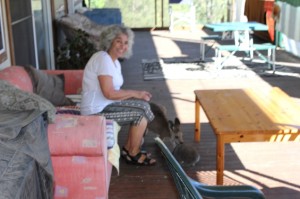 My sister Andriani with Bozo 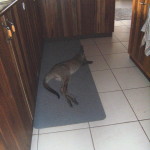 cheeky Bozo sneaked into the kitchen! 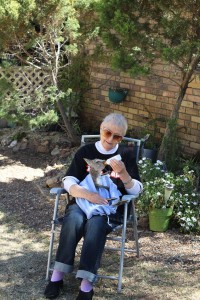 When Bozo was younger I used to take him into town. My friend Bunny would roo sit while I did my shopping. She would feed Bozo and give him lots of TLC so she is a favourite also! 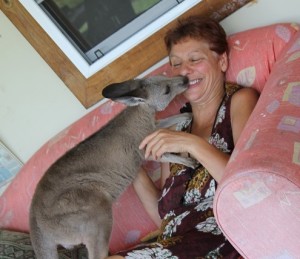