Finally we have almost got the flight aviary built. It will be wonderful to have it finished so we can offer surrendered birds that can’t be released for whatever reason but to healthy to be euthanized a nice home. We have it constructed so it can be divided into 2 if need be which gives us more options when taking native  birds that will be released but have interim injury. The 3 cockatiels that we already have which went from a large cage to a small aviary then to a large aviary will be in heaven when they have all this added space. Ideally no aviary is the best but not always an option unfortunately. Fu is an old male bird that came to us from “Let the Birds Fly Free’ an organisation that takes in surrendered birds and re homes them .We have no background on him but we know that he doesn’t like to be handled but does take to some people and lands on their heads randomly if he feels like it! 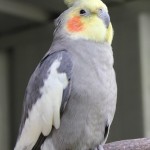 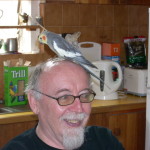 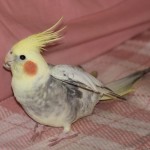 Chu was left at the back of a vet in Marrickville Sydney with her left wing so badly clipped in two places through the vein  and bleeding badly.We wondered if she was ever going to recover. It’s hard to believe that someone could do this to a bird. After lots of TLC she did recover and grew back her wings feathers and she flies beautifully .She is now a happy bird. Man came to us through our bird vet Alex Rosenwax . His owner had died and he had been left in the care of someone who just didn’t know what to do. He was surrendered to Alex who didn’t hold that much hope for him but Alex always tries to save an animal if possible. Man had a severe case of Giardia , microscopic motile organisms commonly found in birds in Sydney. The symptoms are  diarrhoea ,weight loss, dry skin and feather picking. He  had  his tail feathers and a few wing feathers left and could still fly. He was suffering from depression .The outcome for cockatiels and budgies is death if left untreated  We took him on  and under instructions from Alex administered his treatment which was eventually 100% successful! 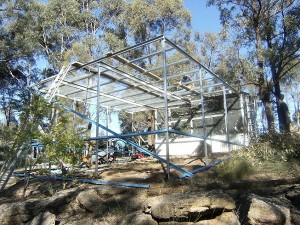 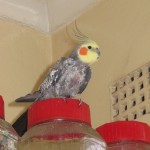 Mani when we first took him in.

We have made good progress with the control of tiger pear. I received a small grant to help with purchase of the sprayers and toxin which has been very helpful. We are also making some progress with the clearing of other introduced plants that are a pest in the Australian bush.

We have been seeing endangered Casuarina Cockatoos flying over head regularly  for the past couple of months. Mostly we see 2 but  we have seen 6 in flight together.1 couple have stopped on house paddock to eat some casuarina off a small tree and we were able to photograph them. 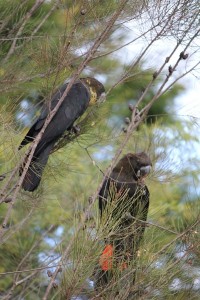 Casuarina Cockatoos
The female has the yellow throat.