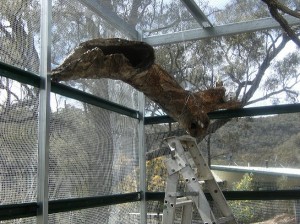 The flight aviary is finished apart from some cosmetic outside painting which I’m doing in dribs & drabs in between other things. Our cockatiels love the big space and much to our surprise made a nest  and laid some eggs which are fertile as a couple of mornings ago I put my eye to the small hole at the bottom of the log and a bird was hatching! Mani ,the male, is very protective and will let us know he means business when we get to close.  Chu is taking it all very calmly. There were 2 eggs and we don’t know yet if the other has hatched. We have contacted our bird vet in Sydney and let them know we are now able to take some birds which need a home but can’t be released and also birds endemic to this area for rehab if they are suitable for a wire aviary. We have designed the aviary so it can still be used as two areas if need be. Sadly, Fu ,who was the old bird died a couple of days ago of natural causes, old age! At least we know he had some time with us that was O.K. 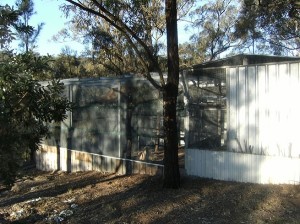 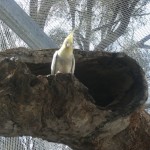 Chu trying out the furniture

We would also like to build a raptor aviary but that project will be down the track a bit.. Raptors have to kept in a soft aviary otherwise they damage their feathers and they have to be 100% for flight when catching prey.