Larry to be the carer of these two.

Eddie & Ivy came from our colleague Meg . Meg had rescued Ivy and had her in care since she was about 2kilo. She put out phone calls to get Ivy a friend and eventually got Eddie passed to her. It took ages and by then these little bulldozers were about 5kilo. Eddie was about 1k heavier than Ivy and Meg thought he was a bit intimidating for Ivy with his very rough play. She put a divider into the area she had them in so they could see each other but didn’t like to leave them in the same area together without supervision.As they were coming here to go into our wombat pen together she did eventually put them together but by this time they had hit 10k Eddie and 9k Ivy.Wombats should really be buddied at about 3.5 – 4 kilo. When they came they were  still on milk and Meg had been bottle feeding them once a day , eve.  Eddie soon made friends with Larry but Ivy would not show herself at all. Eddie wrecked his teat immediately and was so rough he would yank the teat off the bottle . As Ivy wouldn’t come out Larry decided to put 200mls of milk into a bowl every night.We used a night ops camera to observe them and they were both drinking. 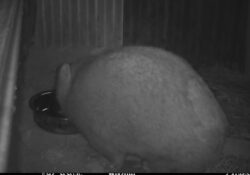 Strangely enough it was Eddie who got attacked on his rump by Ivy a few weeks in and ended up with a large patch of missing fur but no wounds .A couple of weeks later she clawed a hole in behind his ear , quite deep but Larry was able to treat every night with antibiotic cream. Cleary Ivy had decided she needed to show her strength to this roughster! Eddie healed up everywhere but had no fur on his rump for ages.

Ivy always has some some claw marks on her back and a couple of small patches were Eddie is rough but generally looking good .These 2 not the perfect pair!! 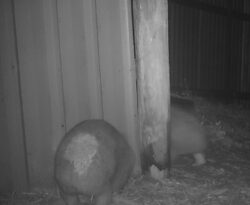 If we had a choice  we would have kept them separated but not having the facility that did not happen at the time .

We have now received a small grant from Wombat Protection Society to help with building  a larger pen. It will have  divisions giving us a choice of separating wombats when needed. 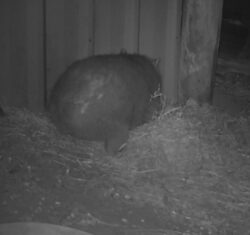 Ivy has scratches on rump inflicted by Eddie!

They soon munched up most of the  growing grass and Larry provides them with a big bag of fresh grass every night , a big plate of coolshine nuts and almonds for a treat ,which they love. 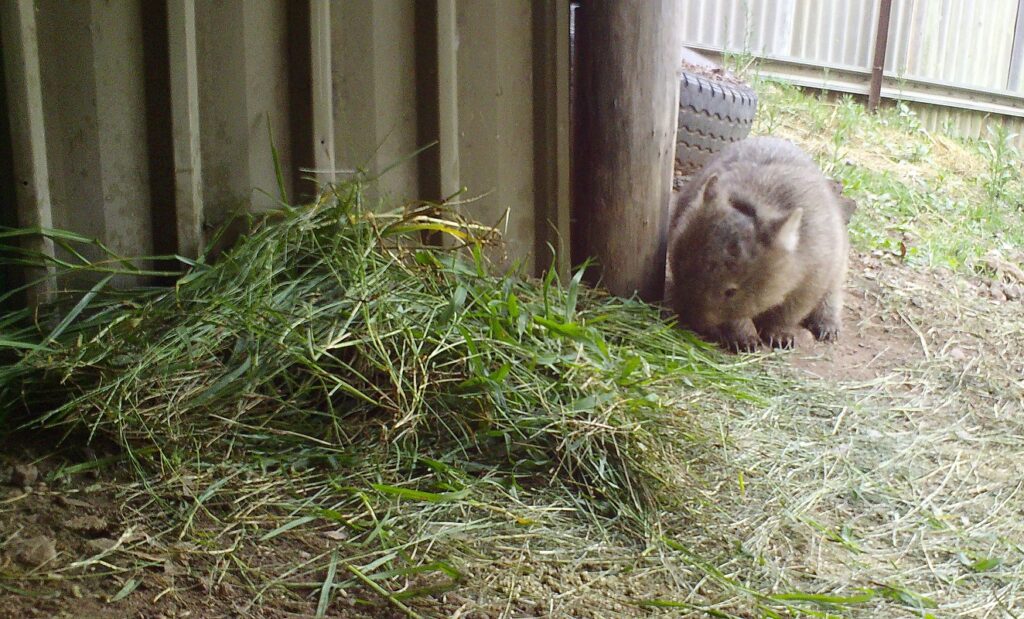 Larry cant start building with Eddie & Ivy in the pen.He will start once they are soft released which we hope will be in about 8 weeks. There is a flap in the back of the pen which will be unlocked so they can go in and out .They will be support feed initially until they decide they would rather not come back at all!!