Only two ended up here on that day as Kei had a broken foot which had still not healed and had to stay in smaller confinement with Judy till her foot healed. Kashik, a male  weighed  2820grams and Kadifie ,a female 2890grams. 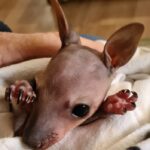 Kashik with mum Judy on intake. 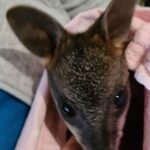 They were drinking milk  morning and evening. Swamp Wallabies eat native browse so a bucket in the centre of the shed was set up full of all the clippings they like to eat. Some favourites are Casuarina,  Kurrajong and   Melaleuca. Their top favourite is River Willow  considered a notorious pest by some but has another role now. As the climate has got warmer for temperature-sensitive animals, their dense, leafy canopy may make willows the lesser of two evils . 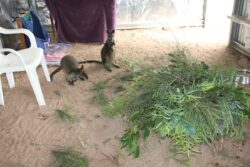 Is that all for us? 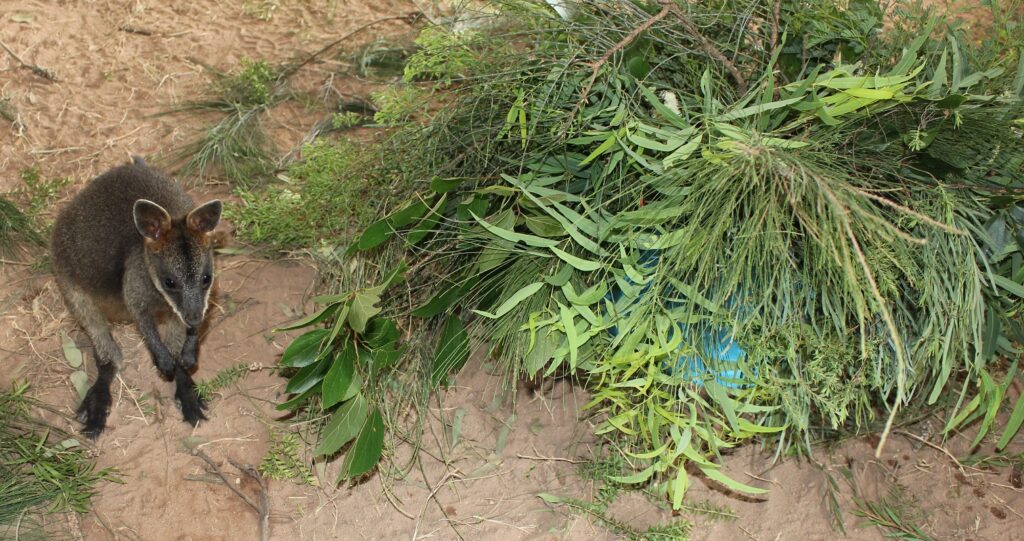 May as well tuck in then.

I had never had Swampies in care before so wasn’t sure what to expect. These two were going into the large pen that the Greys had been in when they got cocci. Swampies are not susceptible to cocci like Greys which is why I agreed to take them.

The pen had been set up for Greys so it was fortunate Judy came and explained Swamp Wallaby  behaviour. 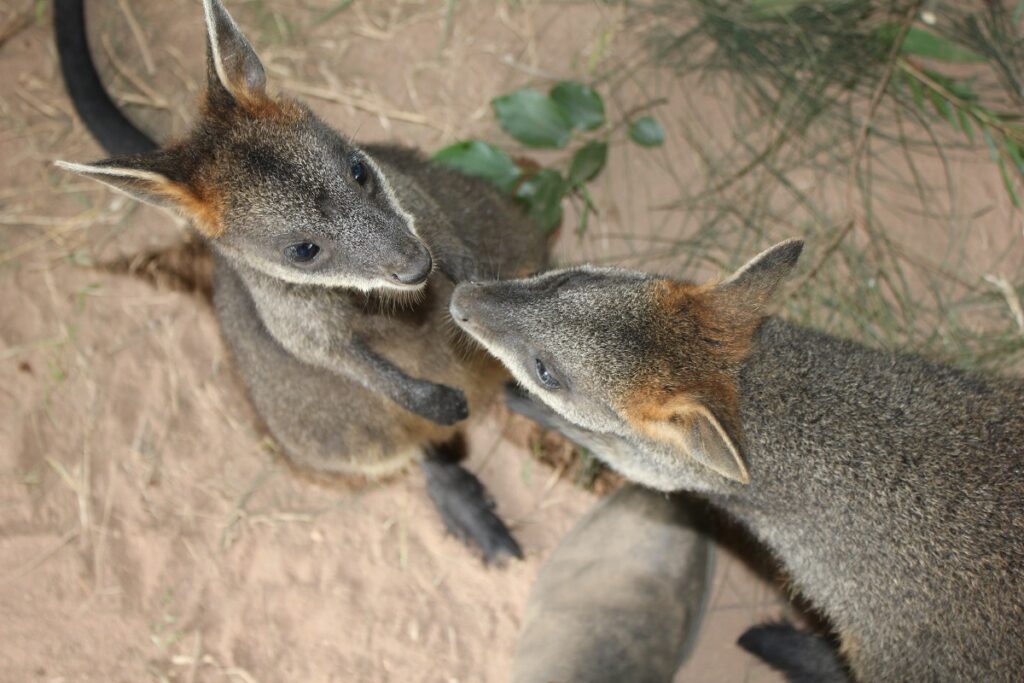 We immediately had to completely fill in any gaps , tiny as they were, under gates or at the sides off. These little creatures are fast and expert escape artists,  also experts at hiding. Consequently the pen should be set up so they have “hides” and ideally  should have long grasses. The grass in the pen was short, ideal for grazing greys. Larry constructed some hides and dragged enormous logs into the pen for them to jump on and over. Once the grass grew they loved it and began hiding under it and could not be found if that’s what they choose!!

The fences surrounding the pen are 6′  high and the gate which closes off the smaller area to the large pen is 4′. The pen is approx. 75metres square.When the 4′ gate is closed the area encompassing the shed is approx. 30x15metres. Their shed in this area  approx. 6×3 metres. Initially we kept them in the part of the pen which housed their shed and could be closed off by the 4′ gate. This was until they accepted me as mum and would come from the larger area once they heard me come in with their bottles. It took a couple of weeks and they settled in well then had the run of the entire pen coming to their shed for bottles or almonds! All macropods and wombats we have had in care love raw almonds. They also had a hide in the shed which was a table with a large towel draped around it! Kashik used the table top more to leap up and down rather than the hide , show off! 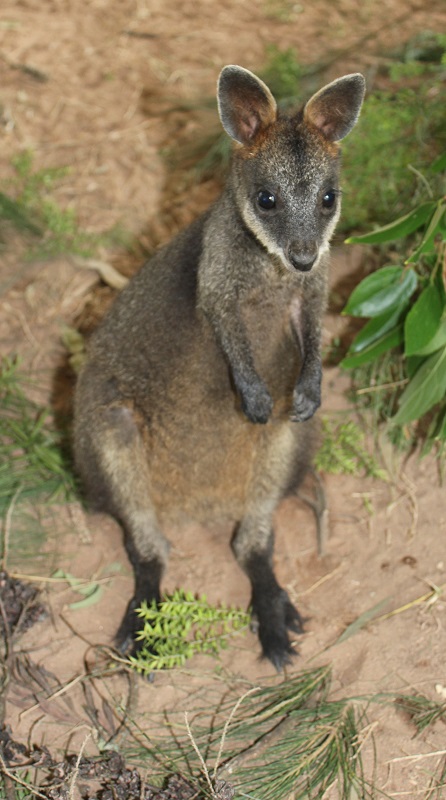 Do ya think I’m cute?

Eventually Kei’s foot healed with Judy’s patient TLC. Judy was worried about Kei coming as she had been confined for so long and had not been able to be transferred at the correct time. Would the other 2 accept her again as part of the group and how would she adjust to me being older than desirable for a carer change?The 1st of March Judy came with Kei and stayed a couple of nights to try and get her settled.The 3 of them were all around 3500 grams at the time .They were all still drinking morn & eve bottles. We closed off the gate thinking it would be best to keep Kei in the smaller area to begin with so we could see her .We thought Kashik & Kadifie wouldn’t like being confined   to the smaller area but they seemed fine. Kei wouldn’t come near  Judy after she was set free in there.Judy tried everything to get her to drink her bottle but she refused.There was lots of grass and native browse in there so we thought she would be O.K. Lots of people wean their macropods before I do. I prefer to keep them drinking their formula for as long as possible as I believe it’s good for them. After a couple of days  Judy had to leave and trusted I would do my best with Kei. Once Judy had gone  the heavy rain started, thunder booming and lightning striking for a couple of days and nights.Swampies don’t mind the wet   but they are startled by loud noises.When I went in the next day, no Kei!. She had obviously jumped the 4 ft gate . I did find her after  extensive searching and spent the next week crawling around on my belly to make sure I wasn’t a tall intimidating figure, with outstretched arm holding her milk bottle toward her. After persevering she accepted the bottle and loved drinking her milk again. I can’t say it was a very comfortable experience for me but it paid off and a week later she was coming to the shed with the other 2 for her milk and accepted me as her carer. Bribing her with almonds helped!! I have to say it made me happy and I felt pleased with my efforts.Occasionally they were allowed a bad treat! 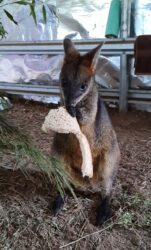 Just around this time my Sammy became very ill. A terrible time which I will write about in my next post.

By mid April the 3 Ks all aprox. 5650grams , all still on morn & eve milk but no longer liked being picked up and weighed.

By mid June they were only on a small amount of evening milk then a couple of weeks totally  weaned.All around the 7kilo mark and ready to go free.

I released them early in July .Kashik hung around for a day then disappeared. The girls never left the pen till night time and we never saw them after that for about 4 weeks.

One morning I looked out the window and there was 1 of them in the front yard. I went out with almonds and called .It was Kei and she came over to me and ate several almonds. I had a repeat that eve and the next morning but havent seen her since. 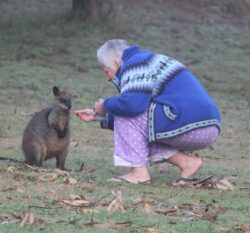 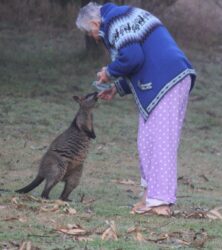 We have spotted another one in the adjoining paddock and Larry saw two of them at dusk moving like streaked lightning past the front of the house and enter their old pen.All the gates are open so they can come and go as they please. They are obviously all thriving and enjoying their return to the wild.!