Sat 24th April 2021 – Larry decided to go to Merriwa Races with some friends. As they approached the entry a car a couple in front hit a grey kangaroo on the road.She was a young mother with a joey in pouch . Larry immediately went to the scene but the poor mother had died with the impact but little pinkie in pouch alive. He removed the baby and wrapped him to keep him warm , hopefully maintaining mum’s body temp, then drove back home 30ks with joey which he gave to me and told me he had already named him Sam.

Sam was aprox. 500 grams which made him about 4 mths old. A newborn joey is about the size of a peanut . 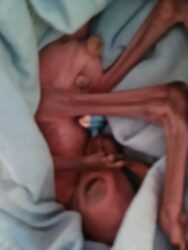 He was so fragile , ears almost flat and eyes still closed , a tiny little creature. So started my love a fair with Sammy!! I was terrified of either having his body temp to hot or to cold . I used a hot water bottle and monitored temp with a digital thermometer. The temp never stays even for long so it’s a continuous process of  moving heat and padding around. I had been reading about getting a pet incubator as heard they are very good. I decided that as they needed to be on continuously wouldn’t be good here as we are off grid and use only solar. In hindsight I have asked myself many times why I didn’t just have him attached to me all the time in a small bag close to my body for body heat and so he could hear my heartbeat. I did that  with the first grey joey I raised ‘Bozzo”. I have realised  that I listen a lot to other people and I quite often doubt myself imagining that others are always going to know better . People say that you shouldn’t handle a joey all the time and I do agree but having joey in a bag attached to one’s self so they are getting your natural body heat is quite different. I wish I had done that with Sam as it was 100% effective with Bozzo. Naturally you have to have a warm place on the ready where you put baby when necessary. 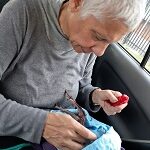 applying pawpaw over Sam’s pink skin fuless skin – you can see how small he is !

After a few days Sam began to feed quite well .By the 10th May he was sucking his teat independently for his milk and I was able to stop syringe feeding.He had put on weight and was now aprox. 670grams .I transitioned him to a slightly stronger milk formula. This happens naturally in mum’s pouch. The inside of the pouch is warm, nearly fur-less, and has four nipples that supply milk with different nutrient levels. The pouch is lined with sweat glands that release antimicrobial fluid to protect the joey from germs, viruses and parasites. How amazing they are! Because joeys are naturally kept at a high humidity in the pouch I used pawpaw ointment to rub over Sammy’s pink furless skin to keep it from drying out. I noticed Sam’s heels had small patches where the leathery skin wasn’t covering. 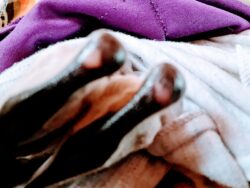 This worried me a bit so I called Lynda who said to stop using flannel inner bags, as they draw the moisture, and change to single knit jersey.She said she didn’t think it would be a lingering problem and to spread  the pawpaw onto his heels  frequently. She said Sam was probably a restless little fellow and turned himself a lot in his bag , rubbing his delicate little heels. Lynda was correct and eventually he grew the leathery covering he needed. Sam continued to grow and by the time he was 1500 grams I thought I would see if I could get another little joey so he didn’t have to grow up alone.

Sam having a big stretch 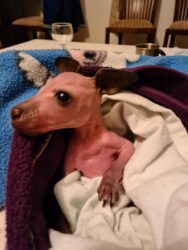 Sam May 11th. He will soon have a friend. 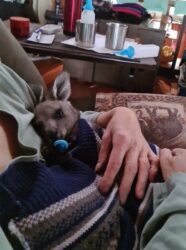 I  made a call to the macropod Wildlife Aid macropod co to ask if someone might have a little joey in care about Sam’s weight they would let me have as a buddy for Sammy. Michelle very kindly allowed me to have Nikki.Michelle had 3 little ones in care as  at that time .