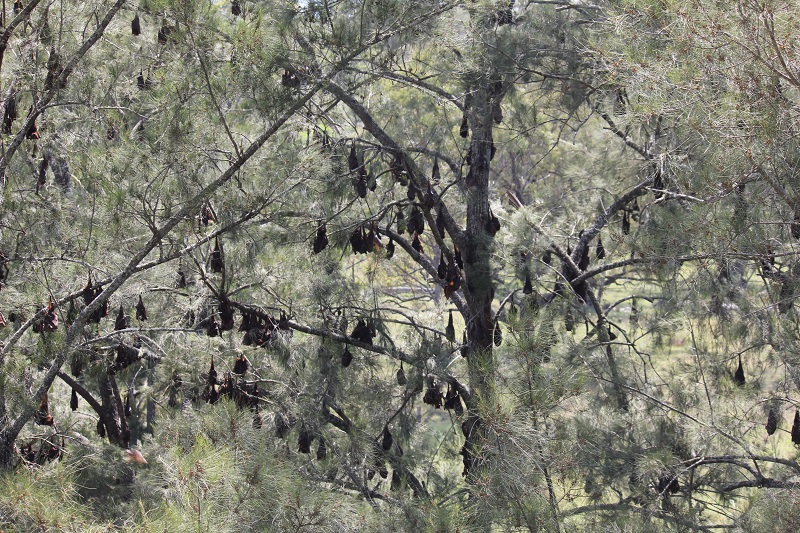 A couple of months ago we heard the distinctive sound of Flying Foxes . We have never seen Flying Foxes here although we are told they have been here before.  Bats are the only mammals capable of  sustained flight. Conservation of our Flying Foxes is really important because of their role in the pollination and seed dispersal of Australian forest trees. Grey Headed Flying Foxes are listed as vulnerable , due to the logging of their habitat. They are found in coastal south-eastern Australia from Victoria to Miriam Vale in Queensland ,and inland to the western slopes. Adults weigh from 600-1000g with a forearm of 140-175 mm. In captivity they can live for 30 years. To my knowledge there is no accurate data for lifespan in the wild although scientists have used growth rings in the teeth which show some animals have existed for over 20 years.

Last night about 7.45pm I was having a cold shower outside. The moon was not quite full but full enough to illuminate the night . Directly above me almost close enough to touch thousands of Flying Foxes were heading out from camp to feed . It took about 20 minutes for them all to pass by. It really was a wonderful sight and I thought how lucky I was to see that at home. 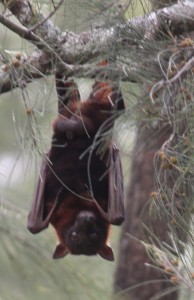 up close and personal

A very different experience from seeing them fly out over the city areas . I thought about Stellaluna , my little orphan I raised and wondered if she might be among them! She did come here for a weekend .Her and I travelled from Sydney by train .She was snuggled up in the pocket in front of my T.shirt, custom made for her. She was first taken to the crèche at Gordon for a few weeks before release as there is a large colony live there. On release she went to Gordon Railway Station and landed on a man’s shoulder .Fortunately this fellow liked the FFs and knew them and about the crèche so he took her there. All the ones at the crèche were tagged ( also had an item of mum’s clothing to hang beside) so Judy who runs the crèche knew who it was. She was kept there for a few more weeks before releasing again. I reckon she was trying to get back to mum and remembered (who says they have no memory) that the train might take her there. 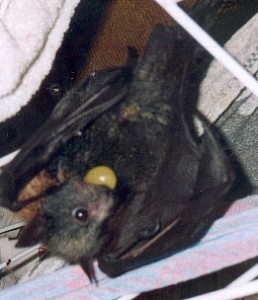 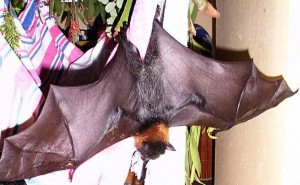 To a tired bat In the city overhead power lines look like a nice branch to rest on. Usually they will be electrocuted when they reach for the next “branch”. During October to December  often the female bats that stop to rest on the power lines,  are carrying their baby (extra weight) and tired from having to look after two.If you see a bat hanging on a powerline by itself during the day, it is either seriously injured or dead. In either case, please always be on the lookout for a baby as they often survive the electrocution and can live for up to four days clinging to their mother. If there are any signs of life for the adult and/or baby, please call a wildlife rescue line immediately,  and note the street address and if possible the power pole numbers.

Energy companies  assist bat carers to retrieve bats from power lines although they can take some time and some orphans may die during the wait. When we lived in Sydney Larry devised a pole arrangement for retrieving bats of power lines. It’s illegal so I certainly don’t advise anyone to do such a dangerous thing. However, he was successful in saving some without electrocuting himself. I had a little orphan named “Electra”  of course! Power lines and aerial wires kill thousands of flying fox yearly. Crocodiles, snakes, white bellied sea eagles, power owls and goannas are known predators of flying foxes. 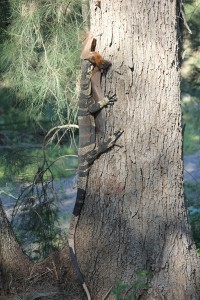 Crows,Dingoes, domestic dogs and foxes are also seen around camps, probably scavenging for dead individuals. We have discovered that Goanna’s also prey on Flying Foxes.

Since I last posted an update Larry has spotted a Squirrel Glider so we know they are around here also .Unfortunately he didn’t have his camera. He also saw an Eastern yellow Robin, although said to be common we haven’t seen any here before. We were excited that we had flocks of musk lorikeets visiting for a couple of months. We have never seen any type of lorikeet here before. 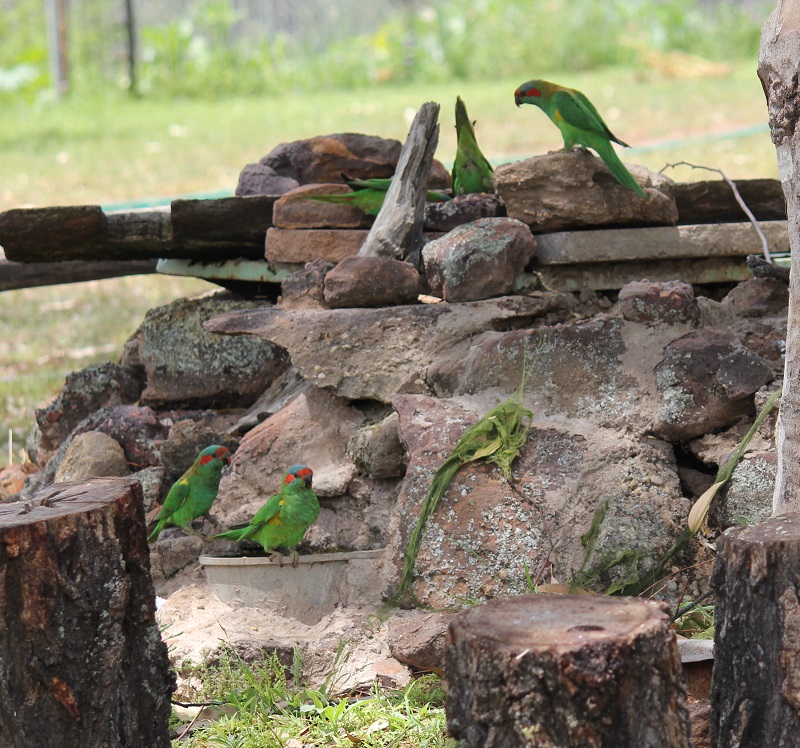 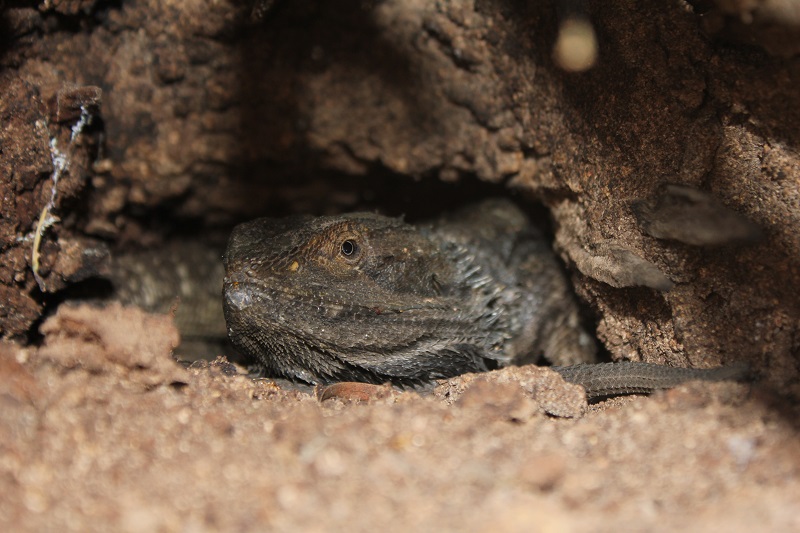 I spotted this Bearded Dragon sun baking while doing some raking . He went off into his log when he realised I was around . 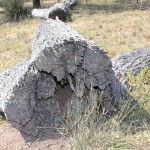 The Koels have done their yearly pass through. We haven’t heard one for a week so we think they have moved on. Although we are delighted when they arrive those of you who hear the constant Koel cry will understand when we say ,thank goodness! They had  fierce competition this year from the resident Friar birds for the Mulberries. 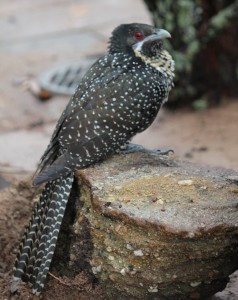 We have 2 trees which came out in lots of berries this year but we didn’t get to eat any!  Koels love them along with loquats which we didn’t know we had as we thought the tree was an avocado. We did get some of them though  which I made into very tasty jam. The friar birds had their yearly feast on the silky oak flowers and were drunk for weeks! 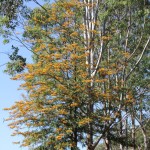 Bronte still comes and spends time here in the house paddock and is now having her third baby, she’s a wonderful mother .Bebe is nearly as large her and still drinking milk. All those manuals that say wean greys at 12mths have got it wrong! We have had proof more than once now. We had a mother grey with a very young a baby that started coming here and she had a nasty mouth wound .We couldn’t get anywhere near her and felt sure she was going to die. Larry found her dead down on the river bank a couple of weeks later. The young one would come here sometimes with Bronte and Bebe , sometimes with Bozo who is sometimes  here with Bronte .We think the pouch young she is carrying now is probably his. We called the other youngster Bebop and tried to get near thinking we might be able to bottle feed but to no avail. Surprisingly a couple of months later this little one was still around and managed to survive without milk. I think having a safe place to come to would have also helped. I guess this means that you can wean earlier but if it’s possible not to. If you look closely at the image of Bebop you can see that the fur doesn’t look as healthy as Bebe or Britty I will stick with what I have always done with the greys and  give milk till at least 16 – 18 months regardless of what a lot of the manuals say! 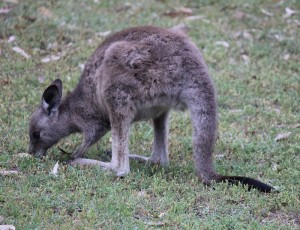 We haven’t seen Bebop for a while now but it is possible especially if a little girl she may have managed to join a group, we hope so.

Britty is about 2 years old now, still at home ……..   completely free as she has been most of her life. Wallaroos are independent at about 16mths old but Britty seems to like it round here. Maybe she will always stay round and bring her babies like Bronte does. We have noticed a very handsome buck hanging around and heard footsteps in the night on the back veranda that sounded to loud for Britty. Larry got up and had a look and it was the buck ! 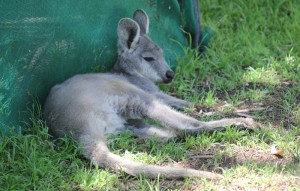 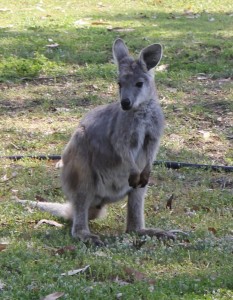 Raising Britty has been very different from the greys .Wallaroos are macropods with attitude! Britty hisses and swipes the broom which she dislikes and bites me occasionally if she feels like it! 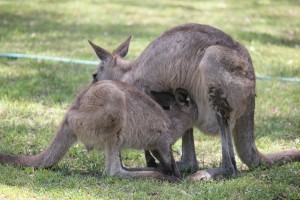 The cockatiels are still very happy and are now 12.Since I took these pics 3 more have been born .We were very surprised to see Lemmon. A cockatiel this colour would not survive long in the wild. We are now taking the eggs away as breeding cockatiels in captivity is not what we want to do. 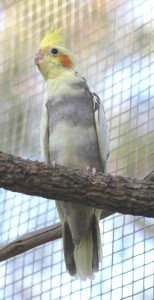 You may remember me talking about the horses that live about 6 ks before our place. When we moved here there were two.”Bailey” mare and “Rebel” stallion. Along came “Twinkle” who we watched being born. I was privileged and I was asked to name her. Now  there are two more , Teensy and Tiny! 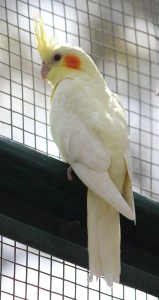 Lemmon – baby of Lady and Fu 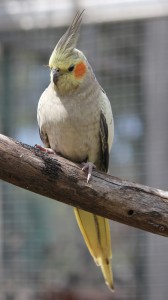 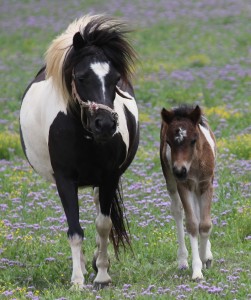 They all get very excited when we pull up at there paddock , running over and neighing !We received a phone call from the owners asking us if we would like Twinkie .naturally we declined , who would split up a herd of almost wild horses that have such a great life! When I say “their paddock” it’s an enormous piece of  land and no one bothers them . They have a dam  for water and when grass is scarce the owners always bring hay for them .We really enjoy stopping for a visit when we go through their turf.

We have had yet another gala that came into care via Merriwa town. Picked up in a backyard unable to fly and was getting a hard time from the others. We kept her and rested her for a couple of weeks then into a bigger space then a successful release. 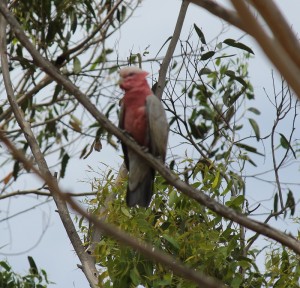 Galah released – happy to be up and away!

The king parrots are around and I will have a race to beat them to the ripe pomegranets which they love eating. This season I have found some recipes to try, green beans with pomegranet  , beetroot,  fig & pomegranet salad with goats cheese , yum, yum.

We had a young adult Tawny Frogmouth come into to care a couple of weeks ago. Sadly it had  got caught on a barbed wire fence in town. The chap that found it managed to get it off the barbed wire but it had sustained some wounds to the left wing. We applied antibiotic cream and also used a 7 day course of oral antibiotics, strapped the wing for support and left it strapped for a week .he was lovely bird , as they all are. He ate well and the open wound healed but the wing obviously ,unfortunately had dislocated at the shoulder when we checked after the week. We had to have him euthanased which is always sad but with a dislocation there is no choice. 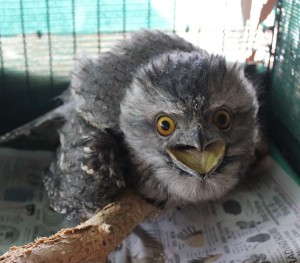 You can see the dropped left wing.

What would an update  be without a report on Splendid Fidel. He has been free now for 13mths and I can finally say that I am satisfied that I did a good job and he is a   free living wild wombat. He turns up at the house paddock some nights as that is part of his territory. I can still touch him but he is quite stand offish and  does his own thing .It’s very easy to lose your heart to a wombat. 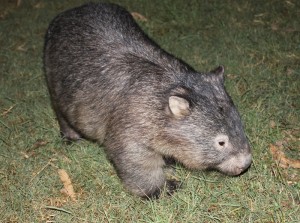 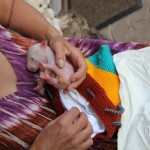