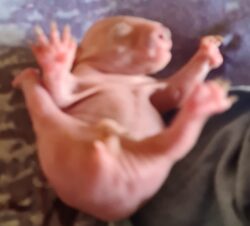 Caring for wildlife has its joys and sadness. It is important to talk about failures in order to come to terms and also in the hope it might help other animals and carers .If in hindsight you can pinpoint what went wrong that’s good but sometimes things remain a mystery as in this case which is mind torturing, wondering why?

Tyke’s mum had been hit by a car. A very sensible MOP checked the pouch and removed the baby. She kept him warm and got him to me asap.

I started him on Formula 1 weak strength  then worked up to normal strength over 3-4 days, also adding impact to his formula. I used a glass syringe to feed him as I prefer glass to plastic for hygiene .Also glass does not stick like plastic and so much easier to get the smallest amounts in to avoid inhalation to the lungs 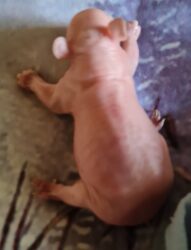 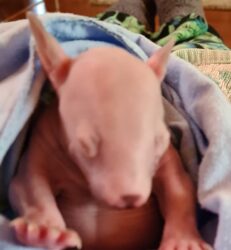 Tyke  was a perfect little guy ,passing urine & faeces, all good .7 days after intake I moved him onto wombaroo  < 0.4  By Dec 1st he had a weight gain of 100grams weighing 240grams.

The hardest part was keeping the temperature even between 28% – 30%. I have become better at this over time . An incubator is not an option for me as we are on solar power out here in the bush. The weather this time of the year has been quite crazy out here .In the past when I have had furless wombats unable to thermoregulate I have had to use ice blocks to keep the temperature down .With Tyke it was necessary to use heat to keep the temperature up for quite some time. Now it is extremely hot out here, but this has only happened in the past couple of weeks.

Everything progressed very well, and Tyke hit the 292gram mark  on Dec 18th. I started his transition to wombaroo 0.4 which went over 6 days . He was looking great and his development going well visually . 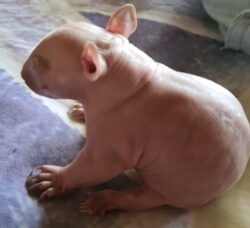 I was staying connected with Judy to report his development but had not called  to tell her I was transitioning Tyke as I never doubted what I was doing . However, Judy tells me that had she known she would have got me to keep him on the <0.4  for some time longer. Although she does not believe this in any way would have caused him to die.

When I weighed Tyke after transition, he had lost weight , dropping 7grams, now 285grams. I was surprised as he certainly looked fabulous and faeces and urine all good . I thought he would soon make it up and move fwd. I also at this point tried him with a bottle and teat but it seemed to me his sucking was weaker not stronger, so I continued with the syringe and teat which to me was not unusual for a little guy his size to still need syringe feeding.  The temperature had risen a lot and it was hot, but I kept the ambient temperature between 28-30% , kept a firm eye on it so if it went over 30% moved quickly to correct it. Even so I also thought this might be affecting him as he did not seem as robust, but I was not unduly worried at this point. He continued to take all his feed over the 24hr period. 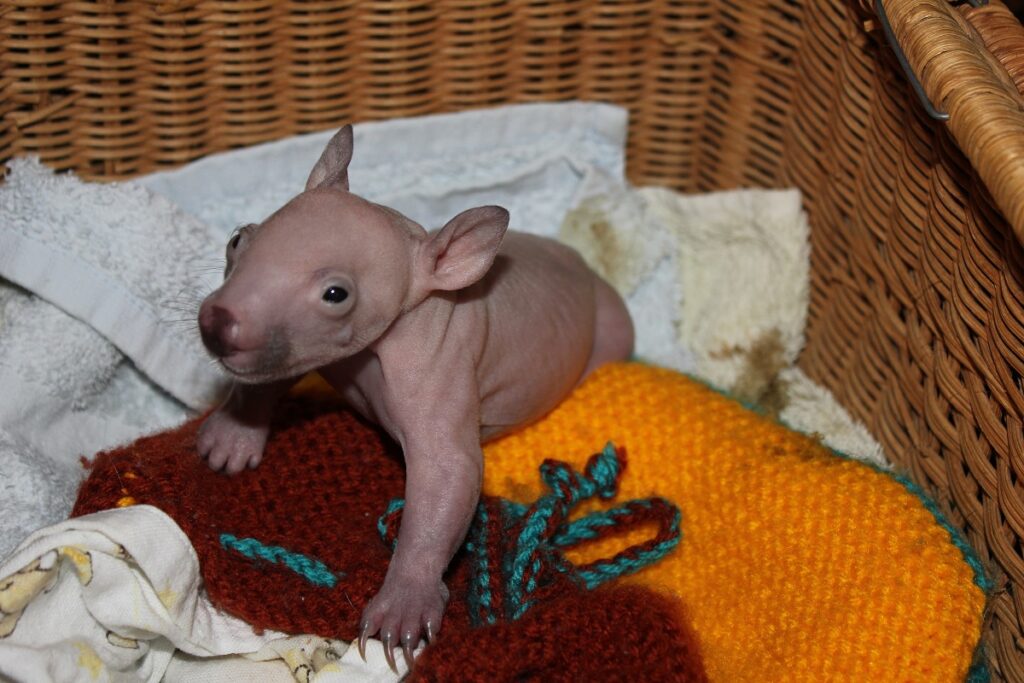 On the 27th of Dec Tyke had his normal 1.45am feed .when I got him up at 6.30am to feed him he was dead. I called my friend Ted Finnie (retired  Taronga wildlife vet ) and took Tyke straight to him for post-mortem.

Tyke had no obvious internal problem of which I was aware. He had his fur showing under his skin , ears up and eyes partially open. His bottom incisors had come through and top  had started to erupt. His physical development was good. Ted determined the cause of death was cardio myopathy . Tyke’s heart was small, but Ted detected some discoloration in a spot which indicated to him the that the aorta was not  pumping blood efficiently round the body. He also detected a small dark patch on the brain which he said tied in with that finding. I cannot explain that to you with more clarity as my understanding is only very superficial.

Post- mortem is inconclusive, but Ted is an “Expert” ( not so called!) so as conclusive as we can get. Why did this happen , we do not know. The death stays a mystery .All the other organs in Tykes body were good.

Ted thought the cause might be a lack of vitamin E deficiently which could be something lacking in the milk formula. This idea was given only as a suggestion ,with unfurred joeys, in the future try using some Vitamix liquid which is a mix of vitamin A D & E. It cannot hurt them but will be taken up if they need it.

The last pic I have of Tyke the day before he died. He was next to me on the couch .It was hot, and he wriggled out of his bag and was lying alongside my thigh. He is in a very relaxed wombat position!! 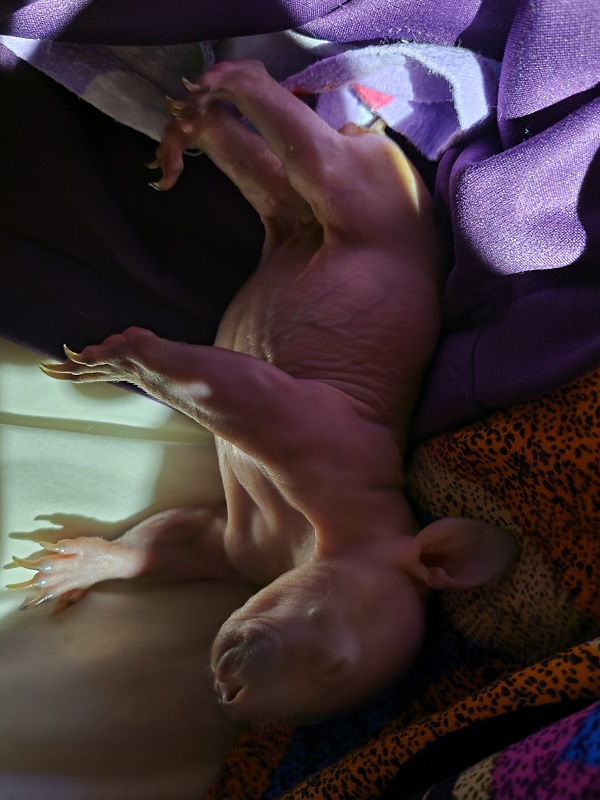 Tyke wriggled out of his bag and was lying alongside my thigh. He is in a very relaxed wombat position!!