I have put off writing this post as I still feel so very sad when i think of my lovely little group. Late Nov it started raining and just kept raining for days and days into Dec. The paddock we had built the large pen in took the brunt and all the rain cascading down the hills came to rest there .The ground was soaked and the waters ran in under the bottom of the shed soaking the ground in there also. This was totally unexpected as was the magnitude of the rainfall.Trying to clean up all the faeces in the shed was very difficult as being wet would dissolve into the ground and cleaning up the faeces in the enormous paddock , impossible.

I had never experienced any greys with coccidiosos before but had heard of how awful it was and heart breaking . I never thought that it would occur here but that is what happened. Nikki suddenly very quickly went downhill. If I had seen it before I may have recognised the symptoms before she started bleeding.She wouldn’t drink and then I noticed she had blood in her bag. I did have Nikki on coccivet as a preventative as soon as she came into my care but unfortunately Nikki  had a compromised immune system due to a rough start and I should have had her on a larger daily doze .Another thing I have learnt , in hindsight. The greys that came from Jasmine had been started on coccivet (amprolium) a couple of weeks before they came here on the minimum doze as that’s what I thought would be O.K. What I should have done was given all 5 a higher daily doze  immediately they all went into care all together in the pen. Something I never knew before is that coccivet can be given at 10 times the daily amount if need be. It may have saved them once rain began.

Baycox is a treatment that is used for pigs to keep coccidiosis at bay and it is the treatment that for years wildlife carers have used for macropods.A lot of people in the wildlife area still believe that is the way . I had heard and now believe that Baycox is a harsh agent and can weaken the animals defences.After much reading and talking with other carers my opinion now is that baycox has not provided much success as a treatment or preventative of coccidiosis in grey knagaroos.I believe it can in fact kill a sick joey. I believe now that overly repetitive use can make a healthy joey sick to the point that it will die.

Despite my efforts and use of baycox as advised Nikki died mid December.She had been Sam’s closest companion for months.

I treated the other 4 with baycox as advised.

The next day later in the afternoon I found Handsome dead in his bag. That morning he was fine , eating , hoping and drinking all his milk. I took his body straight to Ted’s who did a post mortem. Handsome showed no signs of having coccidiosis but had a fractured skull. Handsome had filled out in his time here and he had accepted me as his “mum” .He was walking around with me outside the pen  and loving it. We determined he must have been hopping very fast around inside the paddock and something must have scared him causing him to run headlong into one of the posts or a tree . He had got back to his bag and died.It was so very sad.He was a gorgeous boy and very affectionate.

A couple of days later Precious showed signs of having coccidiosis and even though I moved quicker with her I couldn’t save her. 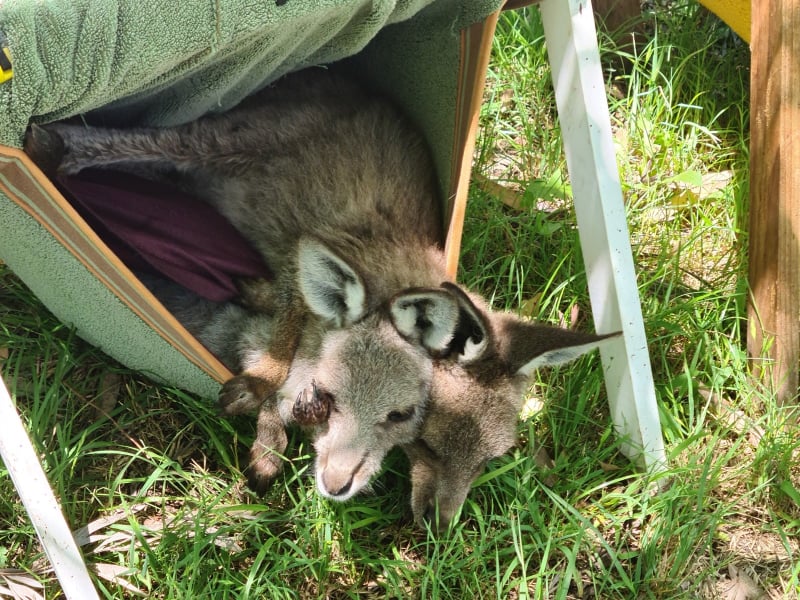 A couple of days went by and then Miss M showed signs of coccidiosis.I treated her as advised  and Sam also even though he seemed fine. sam showed no signs of illness at any time. He had been on coccivet since very young as I always drop a bit of dirt and grass into the bag and start my greys on coccivet at that point. As Sam had grown up here from a little pinky he also hadn’t had the stress of moving to a new place and a new ‘mum”.

I took Miss M out of the pen and bought her inside .She seemed to rally and I thought all was well but she went downhill again a couple of days later and died on Dec 29th.

Poor Sammy was alone. I was offered a couple of other greys a bit younger than him but I was to nervous and upset to bring anymore here at that point in time.I decided that I would just spend more time with Sammy.I used to have breakfast with him then we would go off for a bush walk.He seemed  quite happy to go into his pen and have a good sleep as it was hot during the day. 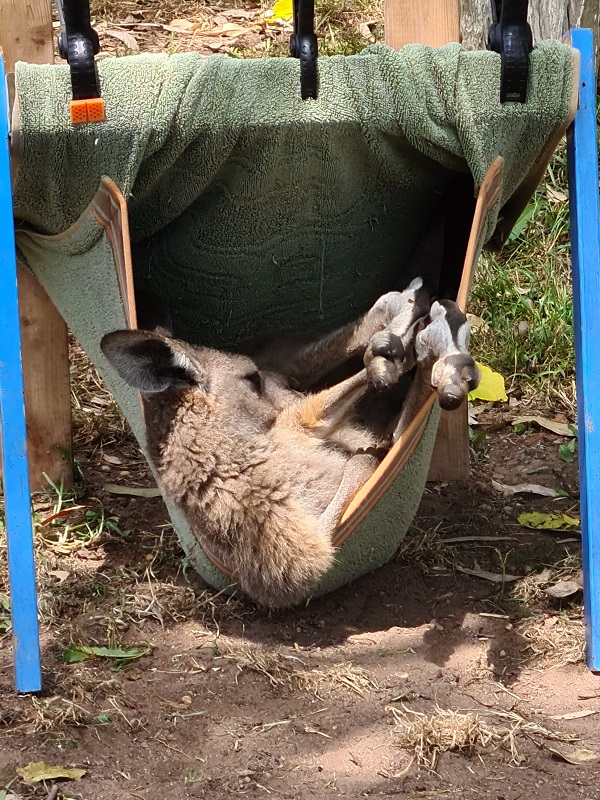 I would give him his evening milk about 6pm take him for a walk about then he would stay around in the house paddock with the red-necks till about 8pm when I would put him into his pen for the night. He had a  stuffed pillow hanging from a tree in the pen that he practised jumping and kicking with. I was advised to treat him every 3 weeks with baycox. I didn’t feel comfortable with this but the advise was from someone far more knowledgeable than me so I followed it.Sammy continued to grow and thrive and we were constant companions. 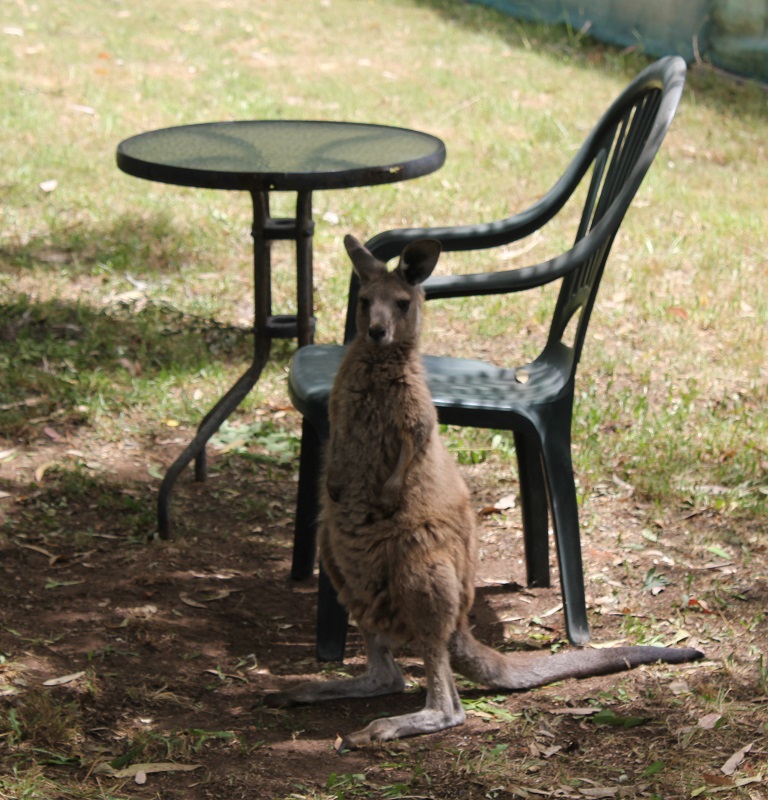 I got a call from the macropod co asking me if I would be willing to take 3 Swamp wallabies .Swamp wallabies are not susceptible to coccidiosis and could go into my large pen.I eventually decided that I would as the big pen was a good space for them.

Sunday 14th Nov was a big day . Jasmine came to Wombat Creek and bought her 3 little greys to move in with Sammy and Nikki. Handsome , a boy ,Precious and Miss Margaret  two girls. She had them for 31/2 months , hard to part with them but they needed more space.

Handsome was a tall lanky fellow weighing 4895 grams. He settled in well , loved his milk and within a few days was taking advantage of the large space covering lots of area with long bounds when we would all go out walking in the pen.

Miss Margaret also settled in well and I felt that she and Nikki recognised each other as Michelle had them together as very young ones before passing Nikki to me and then Miss M  to Jasmine a bit later.Miss M was a bit younger than Nikki. She was 4255 grams when she came here.She was a slower milk drinker than the others and even with coaxing often never drunk all her formula. She loved cuddles and always wanted to be close to me.These 2 would always stay around with me while I had my lunch in the pen. Precious was also tall and lanky and was the heavier of the 3, 4995 grams. She was more aloof and was a bit of a loner but they all got along well and settled in, They all started to fill out and look better than on intake , enjoying the space of the large pen. Although they were all together I spent quite a bit of time with them in the mornings and evenings. They liked it after I had given them all their milk to go out into the pen with me for as long as I could stay. 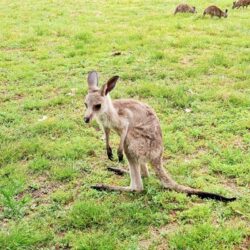 Sam was whirlwind and he didn’t care who was in the shed and who was out in the paddock.He spent hours out there grazing and didn’t care if he was out there till all hours of the night well after the others had come back to shed and hopped into their bags!

I thought because I hadn’t had these 3 as younger babies they wouldn’t bond to me the same way so I wouldn’t be able to take them outside of the pen. They proved me wrong and after about 3 weeks I was able to take them out. I couldn’t take them all together of course as notable to keep an eye on all of them if something scared them and they all scattered.I would take 1 or 2 depending on who let me know they wanted to come! It was great and they all loved their walks outside. 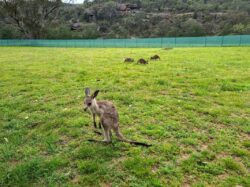 Grazing in the pen 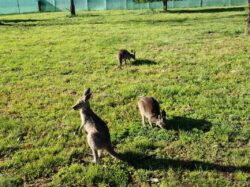