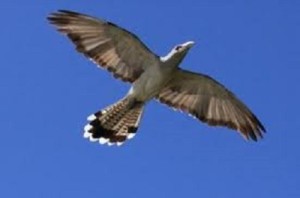 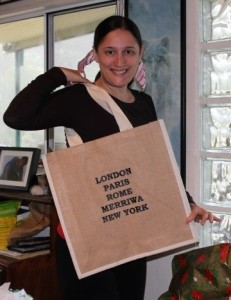 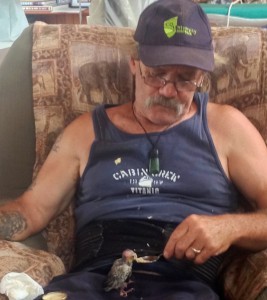 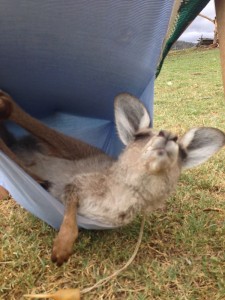 It’s a hard life out here in the bush! 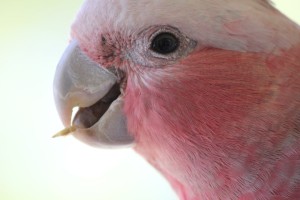 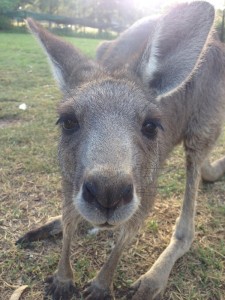 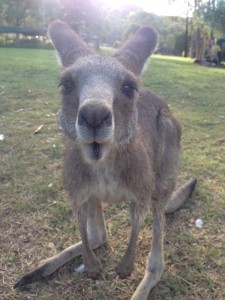 a glamour pose by Bronte 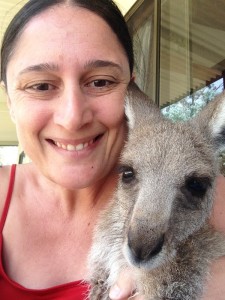 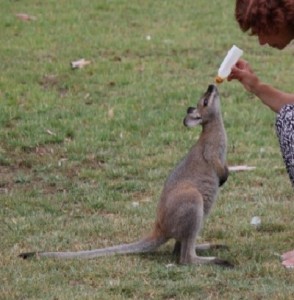 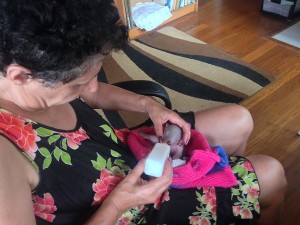 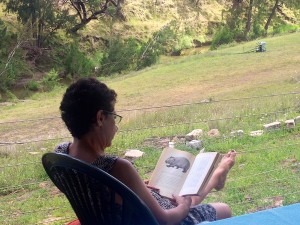 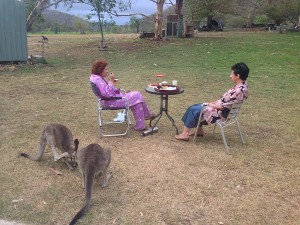 Helen and me having breakfast wit Bucky, Bronte and Galy 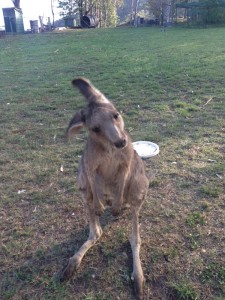 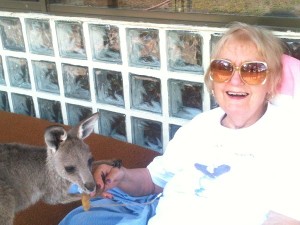 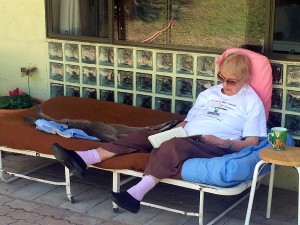 and later in the day after food and drink!

2013 finished and already the end of January 2014! We got a lot done on the property in 2013 but it seems very little in the larger plan. My friend Joan and her husband Ian finally managed to come for a short visit in Oct 2013. Joan was a wires member when Larry and I  joined  and guided us well in the care of birds and reptiles. We have remained friends and I value being able to call on her experience regarding wildlife. She is now involved with Birds Australia. She did a bird count on our property while she was here.  She spotted a  channel  billed cuckoo which the experienced ear heard first. We didn’t realise they pass through on their migration but we saw another two that week after we had  been made aware!

The Channel-billed Cuckoo  lays its eggs in the nest of another bird. It’s a large cuckoo, so it must lay its eggs in the nest of another large bird. Foster parents are usually  currawongs,  magpies, crows and ravens. Eggs are occasionally laid in the mud-nests of white-winged choughs or magpie-larks, and very occasionally in the nests of birds of prey! The Channel-billed Cuckoo migrates to northern and eastern Australia from New Guinea and Indonesia between August and October each year. The birds leave Australia in February or March.

We hope everyone had some enjoyable time out from the usual hum drum over the Xmas and New Year break. We really enjoyed having my sister and niece(her daughter) stay with us for  a few days. My sister Helen spends her time between NZ and USA  and my niece Annaliese lives in New York but loves to travel.

Both are animal lovers so having them here was definite bonus as there we little creatures needing TLC.

Larry was trying very hard to keep one of the cockatiel babies alive and also engrossed in the cricket so was pleased to have them all around to help. Lady, the cockatiel our friends bought us from Swansea hatched 2 eggs in her log.I found one of the babies on the ground having been pushed out of the nest .The difference in development between the two siblings was remarkable. How the little one was still alive is surprising as he couldn’t have been getting much food. Larry tried very hard  but it got to much for the little one after a week.

Billy,the eastern grey kangaroo is now 7700grms. He was still getting in and out of his bag (mum’s pouch)  while Annaliese was here and she spent lots of time cuddling him. He has since discarded his pouch but still likes his dummy! He spends quite a bit of time with Bronte & Bucky so no doubt he really thinks he’s BIG!The other morning while I was watering some of the 130 trees we have planted I spotted some cows that had obviously escaped the restraints of their fencing and made it down to our place.  I gave chase and sent them off back down to cow land. Billy was grazing with Bucky and Bronte in the middle of the paddock and they must have taken fright seeing me like a mad woman running and herding the enormous beasts. I didn’t see them but they took off and Billy went as well. They must have gone off to somewhere cool as it was like a furnace  here for a few days.It must have been quite an ordeal fro him.he returned that afternoon with Bucky and Bronte behind him.He was quite happy to stay close to me for the next 24hrs and even though he grazes with them in the big paddock till late at night he doesn’t go off with them. When they go he comes home.He is now drinking up to 100mls of milk formula morning and evening, he will  soon really be a big boy!

Galy has had the Galahs coming every day for weeks and he finally went off with them about a week ago. He finally worked out he was a Galah not a SCC.It was a very good result .He was used to humans as we had to handle him a lot but hopefully he will wild up quickly and not go landing on anyone’s head.

Moses the red-neck still comes every day. He loves his evening milk and will often drink up to 75mls .He often comes for morning milk as well.He is growing beautifully and seems very relaxed with all his new-found friends.

Fidel is now 1190 grams and is drinking stronger milk formula .It was a relief to have my sister helping with his feeding As he was only 290 grams when he first came into care he had required 6 feeds per 24hrs  and I found myself to be suffering from lack of sleep and was still tired when Helen arrived. Now he’s a bit bigger Larry has  built him a lovely burrow (box) which is dark and keeps nice and cool . He is on 4 feeds per 24hrs but I will be able to get him onto 3 feeds per  24 hrs in the next few days. I will also start putting a bit of grass in his pouch. He will be about 3 kilo when he can go outside from dusk till late for grazing in a temporary  enclosure for safety. At 5 kilo he will be fully emerged from the pouch and want to start digging as the urge is very strong for a wombat.

Bronte’s tummy is looking bigger now and I saw her a baby the other day while she was cleaning her pouch. I saw a pink rear end and a curled tail so the baby is bigger than a jelly bean now!

My early morning duties apart from feeding hungry mouths is the watering of the 130 trees we planted. Billy usually comes and keeps me company and  sometimes Bucky and Bronte as well. Over half of trees seem to be surviving so that’s not to bad.

I am still waiting for a visit from Bozo………  and he has been !  He only came as far as the edge of the house paddock and it’s when Bucky and Bronte were out in the large paddock with the small group Bozo has joined. He must have hopped back here with them but I could see his group in the paddock. He only stayed for a couple of minutes and wasn’t interested in coming near me which is terrific.He is definitely living wild and looks fabulous. A fantastic result given that he was my first macropod and he was alone for so long in the sense that he just had me while he was young. He did  have greys all around him  and I always took him for long walks even though I couldn’t get really close to them  I knew he was aware of the roos around him. I will try to get a pic of him if he comes again but need to have the camera close by.

My friend Bunny stayed for 3 days over Xmas and she’s always willing to baby sit any animal.

Yesterday I picked up a brushtail possum in town which had been delivered by the Western plains zoo .She was found at Sandy Hollow as a young one by  a MOP and taken to the zoo. They have raised her but wanted her released closer to where she came from  so I agreed to take her. She is just over 1kilo so will need to be in the poss aviary till she bulks up a bit ,about 1350 grams . “Squirty Matey ” is a male possum that was bought here by a male wires member from Dubbo who also named him!  He was kept in the aviary till he got used to the food round here then released .He has been living in a large gum in the house paddock for about 1 year now so we are hoping there will be a happy union.

The possum I collected weighs 1100 grams (much bigger than Fidel to look at) she is juvenile/adult and will be ready for release when she is about 1350 grams .Fidel is a tiny baby who in the most recent photo weighs 1225 grams.An interesting comparison. It’s easy to see why wombats are so strong, 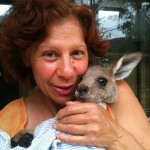 Trying to save Rocket 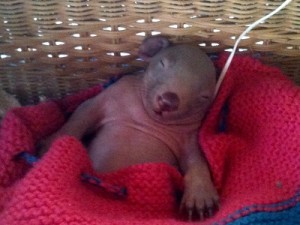 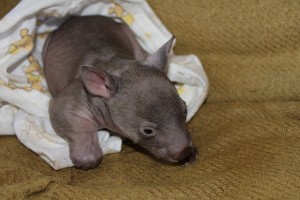 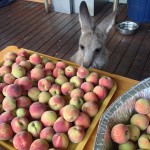 Billy inspecting the peaches off the peach tree 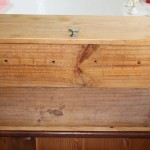 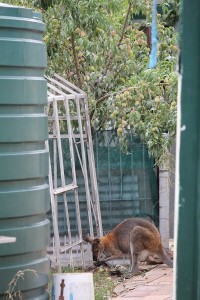 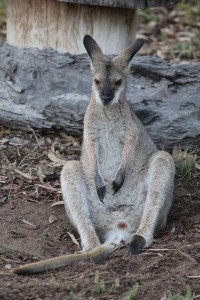 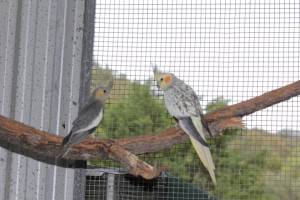 the other sibling (and mum) the same age as poor Rocket 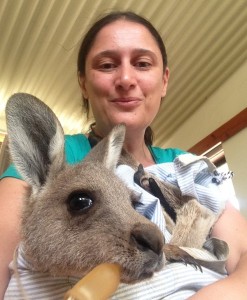 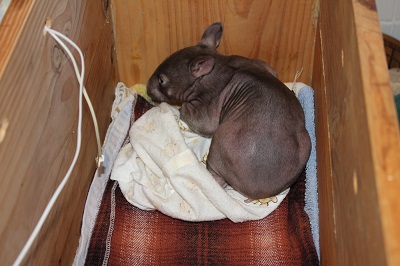 A ball of muscle 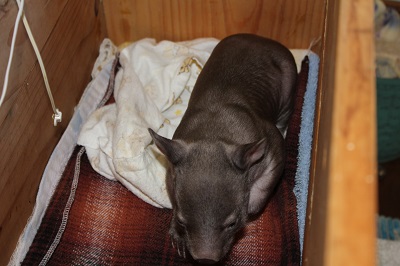 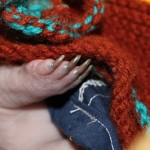 Fidel’s digging claws when he was less than 500 grams!! 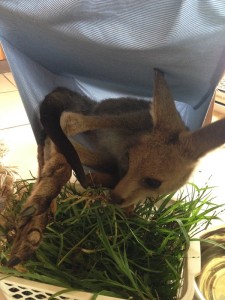