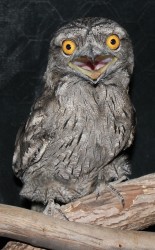 Wally came into care with me March 2018

Wally was a character, he took over about a month after he arrived. He won me over and could do no wrong! Wally was found wandering alone on a property in Merriwa. He was kept there in care for 2 weeks by the lovely woman who found him. She thought she might be able to keep and raise him but hadn’t realised how much time, effort and specialised care was required to get the animal fit and able to be released so she decided she needed to hand him on. I got the phone call and was happy to take him on. He weighed 1400grams on intake so that made him approx. 6mths old. 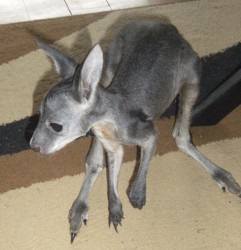 Little Wally on his spindly legs!

Wally had thrush when I got him so he got his thrush treatment .It wasn’t a big problem and cleared up quickly. By mid March Wally was settled and growing, he now weighed approx. 1485 grams .By the end of April Wally was approx. 2365grams.

Early April I decided it would be great to try and get Wally a friend to grow up with. I once again called Penny in Dubbo to see if she had any young Wallaroos in care. She had one who had come into care that weighed 980grm but in accordance with his tail and foot measurement would be about 6mths, he was quite underweight .Larry ,Wally and I  went to Dubbo and collected him. He was a dear little boy, very quiet and seemed quite listless. I thought once I got him home and into a routine he would start to thrive,  but It wasn’t to be. Willy would drink but couldn’t keep anything in as he had continual diarrhoea. There are a number of procedures that I worked through hoping to find a solution but nothing I tried worked. I called Ted and explained what was happening. Ted had a couple of  ideas of what could be going on internally so he prescribed medication for treatment and I would have a glimmer of hope every now when I would think he was seeming a bit brighter. I would put him along side Wally but Wally didn’t seem to be interested in him at all. I persevered for a couple of weeks , trying everything Ted was able to suggest but poor  Willy was very ill. I noticed blood in his urine and  no weight gain . On the 27th April I had him in bed warm and he died during the night. Ted did an autopsy and found that he had such severe enteritis and at such a young age  he was unable to put up any resistance even with the medication. We also found that he had cataracts in both eyes so the poor little thing was blind .Wally instinctively knew all was not right with Willy which is why he had no interest. We don’t know what happened to Willy’s mother or poor little Willy. 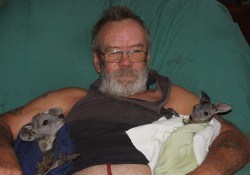 Larry with Wally and Willy 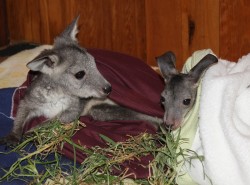 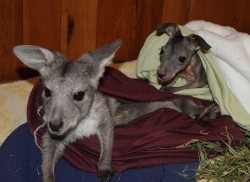 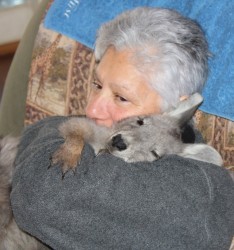 Wally was very independent and used to worry me when he was youngster. We would go off for walks and he would decide to take off and not show himself for up to an hour sometimes. Wallaroos are very agile at leaping around on rocks and he would leap around in the lounge which is split level, up onto the banisters then jump into the kitchen back up the stairs on to back of lounge chairs , oh what a game. Grey kangaroos do not behave this way indoors and would be bound to break a leg if they tried! Wallaroos also give the odd nip if they feel so inclined usually because they have a different idea of what they want to do rather than what you might want! I have been told that some carers won’t take a wallaroo but I love them , they are great characters with super personalities.   I had raised  “Pretty Britty” before Wally , a female Wallaroo, also very  independent but far more refined than Wally. Wally would leap up from the floor and land on me ,settle down for a sleep , see above….what an angel! We have a steep hill to the right of the house which has various wombat tracks on it which wind up and down over rough terrain and rocks. We used to walk along them and one of Wally’s favourite games was to tear along them and back to me whiz past me to the other end back and so on till he was ready to snooze. He had no compunction about banging into to me so I would lose my balance. I’m sure he was laughing. Once he took off and crossed the river which was a dry bed where he crossed at the time. An hour later he hadn’t returned , it started pouring , the river came up and I was sure Wally was going to be lost and hurt but he turned up wet and grinning at me. By Aug 2018 Wally was big and beautiful. Wallaroos mature much quicker than Greys . I stopped locking Wally up at night as he certainly knew what he was doing. He still liked a bit of milk early morning and eve .He would have some milk about 6pm then head off turning up about 6am for some morning milk and a handful of almonds which he loved. He soon tired of milk but still liked his almonds! He looked terrific.

We were  not getting any rain and were in  drought so he stayed around He would go off but come for support feed like a lot of the others were doing .He was still around in January  but had really wild up and didn’t want me mollycoddling him. 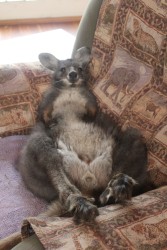 Wally making himself comfortable on my chair! 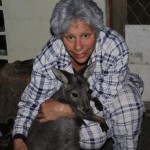 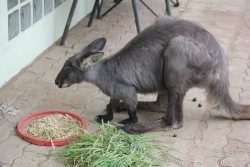 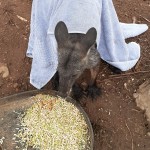 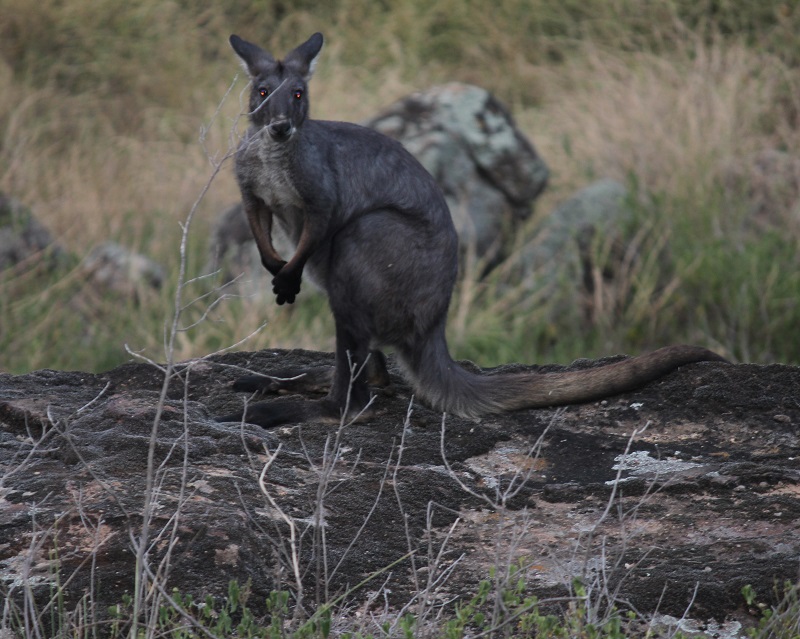