Finally an update ! Almost November and Fidel will have been with us for a year. It’s certainly a commitment taking on a lone wombat from a pinky of 280grams.

Sadly, late in August, my dear brother-in-law David passed away from an unexpected illness that moved very quickly. He was writer and was always reading lots of different material . He and my sister had visited Wombat Creek the previous year and he loved it here. He loved the NZ bush and spent a lot of time in it and was very knowledgeable about it. He found the Australian bush, flora and fauna , very interesting and I’m sorry he didn’t get to spend long here but so pleased he did come . I sent him James Woodford’s book “Secret Life of Wombats” as I knew he would find it very interesting and he did .He thought wombats were splendid creatures .Fidel’s release will be my tribute to David as he always encouraged me in my endeavour to try and contribute something to our great wilderness. 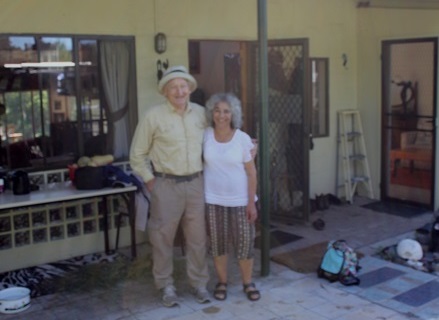 Fidel was 11.6 kilo on the 29th Sept so he is probably over 13kilo now. He has been grazing outside his pen for quite some time now while I sit and read   and occassionaly he would take off and go round to where there are about 4 wombat burrows, not far away from his pen. He began going down the burrows and I have sat round there while 2 big wombats graze around there also. They kept a respectable distance from each other .Wombats do overlap territory and will tolerate a shared burrow occasionally  but don’t  stay down there together unless mum and baby. Fidel began to evade coming back to the pen with me and would run down a burrow so I couldn’t pick him up . I would leave the pen door open and he would be back there in the morning .He has done this about 3 times in the past month. Last week he didn’t appear the next morning or the morning after. The 3rd morning I found him grazing outside his pen and when he saw me he ran over squealing like a little piglet. I have been keeping him in the pen as he has a patch of fur missing fur on his rump. Fortunately no skin breaks .I think I can see 2 marks a bit above the patch which could be claw or teeth so I do think he went down a burrow and woke someone up. Perhaps a good learning curb for him . I don’t know how long the fur takes to grow back but I am trying to find out .The skin on the rump is very tough and about 1 centimetre thick. If a wombat is in the burrow with the rump exposed toward the entrance it can give a powerful thrust upward or sideways crushing  anything that touches the rump , a predators head or a human hand! Wombats  are ancient animals and although they are compared to badgers, bears and beavers there is no relationship. The common wombat is the only living member of it’s genus, Vombatus. 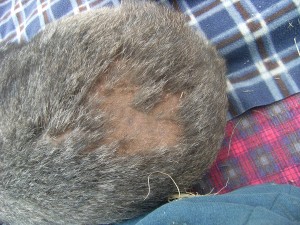 Fidel’s attack patch. The fur will grow back a slightly different colour so we will able to recognise him!

While I am in the pen I like to be comfortable as well so I have my own burrow. Once Fidel has had his milk (he needs to be weaned now) and a good grass feed he thinks it’s time to have a good snore. I am usually lying on my burrow reading  and he lies along side. He is so relaxed I was able to get this pic of him with his head buried. It’s interesting that when he is outside the pen the smallest noise will send him running in straight down his burrow so that’s really good. 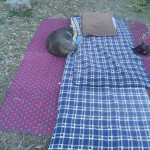 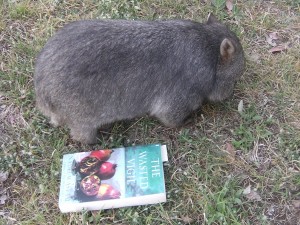 Bronte has been a good first time mum.  Bobo is a little girl , not allowed in the pouch any more .I read that kangaroos can select the sex of the baby if they find that there are two many males in their group. Bronte had all males in her group so  I decided that if this baby was not a girl I would know that the writer was incorrect but I wasn’t let down. Bucky has left and gone with the 2 year old louts group and Billy is coming and going. Bronte and Bobo are often with another young mum who has pouch young and Billy is still hanging around with them sometimes. We had some heavy rain a couple of weeks ago and we were quite surprised to see Billy decided to have a rest on his bed on the front veranda which he hasn’t done for ages and since . We think Bronte must be ready to mate again as some large bucks have been following her around . 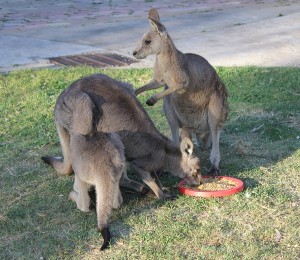 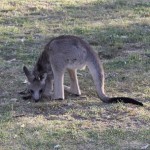 For those of you who remember Moses ,he is still around.. He is BIG. If he’s in the house paddock  and sees me coming he will stay there and let me give him a kiss on the nose then runs off as if he’s terrified! I thought I had a recent pic but I haven’t so here is one of the ever faithful Fatty who must be about 12yrs old by now and still going strong. 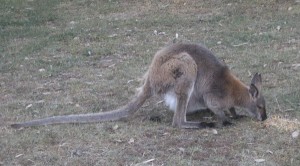 We have treating the resident wombats in the valley for mange if they have it and we see them or someone tells us .We have had some success which is great. One very bad case we tried but unfortunately we think he died .We never found the body but he disappeared and no usage of the  burrow  we knew he had been digging.

This is the poor wombat that was so bad we didn’t hold much hope for him. He was on a property about 3k from ours and the owner heard we were treating them and came and asked us to try. 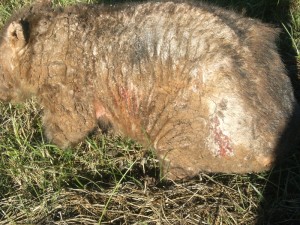 a case of very bad mange 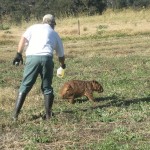 Larry spraying oil onto the poor wombat which does give them some relief .has to be done sparingly as when the animal is run down as this the oil can make it freezing as body temp can’t be maintained properly.

In the centre is 8mls of ivomec contained in a milk top lid .When the wombat comes in or out the ivomec spills on the neck .We have a night vision camera which we set in place to take snapshots when we need to see what’s happening. The treatment is once a week for 8 weeks . 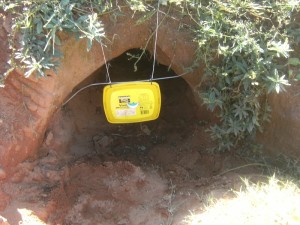 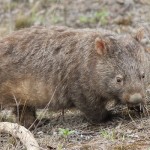 This wombat has been treated.

There is controversy over whether this treatment works or not. The old school of thought says no and wombats with mange should all be shot. We thought it was certainly worth trying as others with properties do it and say it does work. Now we know that it does if the mange is not to progressed. I believe that people with properties that have wombats have an obligation to treat the wombats. If people let a domestic pet die of mange they would be prosecuted if it was reported .Wombats are a native species and therefore supposedly protected……….. I  think the name Common Wombat gives a false impression . 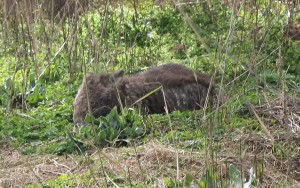 and this one was eventually another successful treatment

The cockatiels continue to live a happy life here and another baby was born not long ago .She was very beautiful , pale lemon like her mother and we called her Arnu .Unfortunately I found her in the aviary with blood on her chest .A piece of wire had worked itself up from under the dirt floor and she had got caught on while learning to fly. She never made it as it had pierced her internally. It was very sad . However Chuchu and Lady  continue to lay eggs and I’m sure another will hatch.

Spring is a lovely time of year here ,warm days but still comfortable at night. The swallows and willie wagtails have all got eggs in their  nests. The  rosellas have made a nest in a  hollow near the house and the plovers have laid eggs not to far away. The Black-faced Cuckoo -shrikes have arrived on their journey North.  The reptiles are out and we are racing the Goannas to the eggs once again . I saw my first snake of the summer a few evenings ago .He was very dark and thin and I wasn’t sure what type, he was hanging round the wombat holes in the long grass .  I did watch him for a bit .I think he was hunting .He Stayed  completely still till I moved off then slithered away down into some very long grass .Wombats will stay away from a burrow if a snake is detected and even after the snake has vacated they will not use the burrow for a bit. Talking of wombats I must away and visit one !